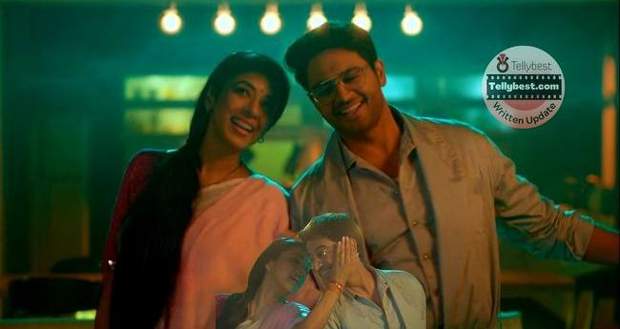 Today's Anupama 27th December 2022 episode starts with Anuj telling Anupama that age is just a number and she does not need to be insecure regarding that.

Anuj says that they are much more experienced than the other young parents and Anupama can bully anyone if they misbehave with her.

Anupama asks Anuj what he will do, to which Anuj replies that his charm is enough to make others sociable with him.

The parents thank Anupama for lending her house space for the rehearsal and showing her their costumes.

Leela watches Anupama interacting with the other parents and says that Anupama cares about every other child except Pari.

Ankush tells Leela that he and Barkha made the same mistake as her and have learned their lesson.

Ankush leaves after warning Leela that anyone who tries to dismantle Anuj-Anupama’s happiness gets cursed.

Leela makes a sour face and says that everyone in that house wants to give free advice.

Later, everyone gathers in the living room after getting ready to go to the function together.

Anupama asks Samar and Dimple if everything is ready and feels nervous as she will share the stage with her daughter for the first time.

However, Leela announces that she will not go as taking Pari to such a crowded place will not be the best option.

Hasmukh asks Leela how she will take care of Pari alone and proposes to stay back with her but Leela declines his offer.

Dimple says that there is nothing made for dinner in the house and says that she shall make khichdi for Leela.

Leela asks Dimple not to bother and assures everyone that she will cook something for herself.

However, as Anupama proposes to make food for Leela, she agrees at once without any complaint.

The others leave for the event while Anupama hurriedly prepares khichdi for Leela.

Anu welcomes the family members with a smile on her face and asks where Anuj and Anupama are.

Ankush tells Pari that Anuj is on his way from his office and will reach there soon.

Anu asks about Anupama and gets nervous, while Samar and Dimple assure her that Anupama will be there soon.

Anupama tries to finish her kitchen work as soon as possible while Anuj reaches the venue with excitement in his eyes.

Anuj greets everyone and asks them if everything is ready backstage along with Anu and Anupama.

Barkha tells Anuj that Anupama is on her way which changes his jolly mood and he rushes inside to check on Anu.

Meanwhile, Anupama completes preparing food for Leela and bumps her knee into the table while hurrying.

Leela asks Anupama to sit quietly until she puts medicine there while Anupama gets anxious seeing the time.

Anuj calls Anupama and asks her where she is, to which Anupama responds that she is leaving the house and reach there in no time.

However, as Anupama proceeds to walk out of the house, Leela stops her from behind with a panicked voice.

Anu begins to cry as time passes the competition is about to start which breaks Anuj’s heart.

Anuj, Samar, and Dimple try to pacify Anu that Anupama is coming but Anu says that her mother did not keep her promise.

Leela tells Anupama that Pari is vomiting and asks her to look after her.

As the function starts, Anuj talks with the host and takes over the stage with his jolly talk so that he can stretch the time a bit.

Anupama drives the car in a haste and prays to God that she reaches before the competition gets over.

© Copyright tellybest.com, 2022, 2023. All Rights Reserved. Unauthorized use and/or duplication of any material from tellybest.com without written permission is strictly prohibited.
Cached Saved on: Wednesday 25th of January 2023 02:22:18 PMCached Disp on: Tuesday 31st of January 2023 07:32:31 PM