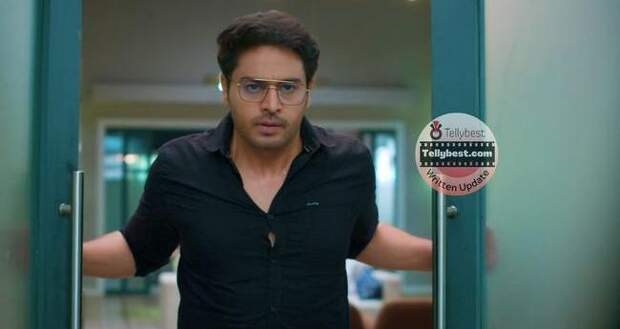 Today's Anupama 27th January 2023 episode starts with Maaya hugging Anu in front of Anuj and Anupama in the middle of the road and asking them how they are so careless.

Maaya asks Anupama why they did not show Anu to the doctor as she is getting fevers frequently.

Anuj says that they can take care of their daughter to which Maaya says that she can see what type of care they are taking of Anu in a mocking tone.

Anupama asks Maaya to come to their house, leaving Anuj shocked as he does not want to let that woman enter his house.

Maaya asks Anupama if it is the best choice to let her come to their house as Devaki never came to Yashoda’s house.

Anupama says that it is fine, as a mother does not forget her motherhood even when she is fighting or clashing with someone else.

Taking Anu back into her arms, Anupama comes home along with others while Maaya stands at the entrance.

After Anupama asks her to come inside, Maaya enters the house and starts chanting the name of Krishna and Devaki.

Anuj asks Anupama to take Anu inside and let her rest as he has many things to discuss.

However, Anu refuses to go inside and says that she will stay with Maaya while hugging her.

Maaya promises that she is there only and asks her to sleep a bit so her fever reduces.

As Maaya tells Anu that she has come to take her with her, Anu gets excited while Anuj-Anupama's faces grows paler.

Anu says she is already in her home but Maaya tells her that that is not her home as her mother is not there.

Maaya reveals that she is Anu’s real mother who has given birth to her leaving Anu confused.

Meanwhile, Vanraj asks Leela why she was asking Maaya about her husband to which Leela replies that she wanted to know who Anu’s father is.

Vanraj asks Leela not to get involved with Maaya as she seems like a dangerous person and thinks about what will happen to Anuj and Anupama.

Anu asks Maaya confusedly if she is her mother then why she was living in the ashram without any parents.

Maaya cries and says that it is because she left her there which brings Anu to tears and she tries to go away from Maaya.

However, Maaya holds onto Anu and asks her not to hate her as she was helpless back then but Anu refuses to accept her apology.

Maaya tells Anu that she wants to show her all the letters and gifts that she prepared for her since her birth but Anu screams “no” to her.

Anu asks why her own mother left her among orphans where she used to cry seeing others with their parents.

At the same time, Vanraj tells Kavya that she will not go to London with Mohit as her husband.

Kavya proposes that he agrees to the Delhi job and says that she will not listen to him after he refuses.

Kavya says that she will fly regardless of whether Vanraj supports her or burns in envy.

At Kapadia Mansion,everyone feels emotional seeing Anu question Maaya like that while Anupama asks Anu to hear out Maaya fully.

Maaya says that she has sinned by leaving Anu in the past but wants to compensate for that mistake by taking her daughter with her.

On asking Anu once more, Anu agrees to go with Maaya but Anuj says no while carrying Anu in his arms.

Anuj announces that no one can take away his daughter from him no matter what they do.

© Copyright tellybest.com, 2022, 2023. All Rights Reserved. Unauthorized use and/or duplication of any material from tellybest.com without written permission is strictly prohibited.
Cached Saved on: Friday 27th of January 2023 11:59:05 PMCached Disp on: Thursday 2nd of February 2023 09:05:26 PM