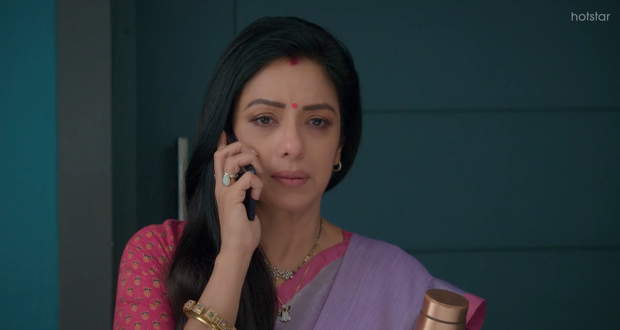 Anuj is furious at Adhik as, because of his actions, everything escalated.

Barkha tries to defend Adhik, being a sister but Anuj asks her to stop covering up for him every time and firmly tells Adhik to never go to the Shah house.

Anuj clearly tells Barkha to not force her decision on Pakhi as her parents know better about her, so it would be their call.

The scene shifts to Vanraj consoling Pakhi and telling her how much he loves her and he wants to be her friend first and father second.

Ankush calms Anuj down and apologizes to him on the behalf of Adhik and Barkha.

Pakhi feels that Anupama has no love left for her now as she’s always busy with her new daughter Anu. She feels all the care and concern is just an act and not anything genuine.

Ankush gets into a heated argument, fuming at Adhik for wanting to use Anupama’s daughter, Pakhi.

Adhik tells Ankush that he genuinely likes Pakhi and there’s nothing wrong if it’s benefiting them in some other way too.

Adhik asks Barkha to trust him while Ankush asks them to stop doing all this because Anuj gave them a last chance.

Anuj pacifies Anupama and shares some quality time with her.

In the Shah house, Kavya feels dejected and cornered by Vanraj.

She also takes a stand for Anupama and tells him how Anupama never misguided their children to disrespect their father but Vanraj is trying his level best to create differences between them.

Meanwhile, Anuj is sleeping with his daughter Anu, Vanraj is seen caressing Pakhi.

Anupama calls Pakhi but Vanraj answers her call and tells her not to worry about Pakhi and that he can solely handle his daughter.

Anupama feels that she is all alone now and in her imagination, she can see everyone leaving her side.

Anupama, being in emotional turmoil, requests Anuj to not leave her as everyone else has left her alone but soon she can see Anuj disappearing and screams out.

She wakes up and realizes how all his relationships splitting up was an unpleasant dream and explains the same to Anuj.

Anuj tucks in Anupama and prays for her well-being and happiness.

The next morning, Anu and Anupama are praying and Anuj is admiring both of them from behind.

© Copyright tellybest.com, 2020, 2021. All Rights Reserved. Unauthorized use and/or duplication of any material from tellybest.com without written permission is strictly prohibited.
Cached Saved on: Sunday 2nd of October 2022 11:39:35 AM