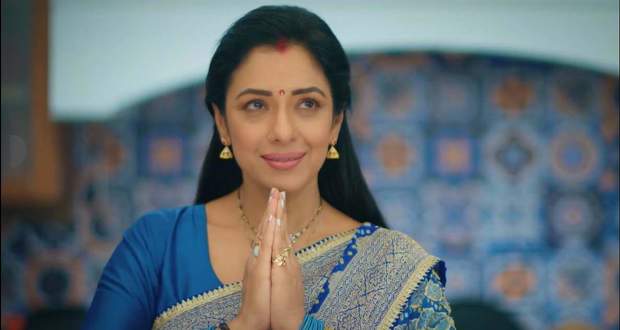 Today's Anupama 27th May 2022 episode starts with Anupama and Anuj talking about the honeymoon destination while Anuj reminds Anupama that this is his brother's gift.

Further, Anupama looks at her phone and is worried about Hasmukh but hides it from Anuj.

Anuj supports Anupama and says they can postpone the honeymoon but Anupama denies it as she knows Anuj is selfless.

Later, Baapuji sends a message through Samar and informs Anupama that his operation is not an emergency and can be done afterward.

Meanwhile, Anupama and Anuj get excited and leave for Mumbai.

Further, the Shahs pray for the safe trip of Anupama and Anuj.

Later, Vanraj stops Kinjal from working in the kitchen and gets protective of her by saying that she is the daughter of this house and needs not worry about working.

On the other hand, Kavya leaves to meet Anirudh and breaks the flower pot in a hurry while everyone watches her talking on the phone with Anirudh.

Later, the love birds Anupama and Anuj walk toward the beach and reminisce their old memories with the ocean's waves.

Feeling content and elated with the joy of their togetherness, people around Anuj and Anupama watch them expressing their love.

On the other hand, Vanraj feels resentment and thinks about Kavya while Samar watches from a distance.

Later, Kinjal talks to Samar that it's natural to feel bad for Vanraj and he should support his father while Samar denies it and walks away.

Enjoying their time at the beach, Anuj and Anupama dance and have a good time.