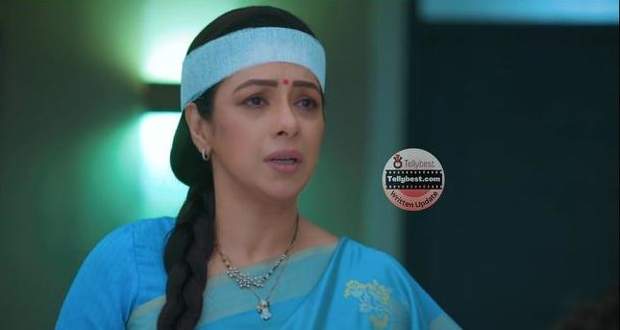 Today's Anupama 27th November 2022 episode starts with Kinjal talking to Kavya while leaving the office and receiving an unknown message thrown into her car.

Kinjal opens the paper and notices the line “Do not support, else you will regret” and gets anxious about the situation.

Meanwhile, Dimple says that she has freed Nirmit from all duties and obligations toward her and asks him to never return.

Dimple announces that she will fight her war by herself and does not need any men’s support to win it.

Nirmit silently proceeds toward the door and opens it to find Samar standing outside.

As Nirmit steps out of the house, Samar comes in and holds Dimple’s hand to support her from falling to the ground.

Dimple says that she does not want any sympathy from anyone but Samar tells her that he is showing his support toward her.

While Anupama introduces Dimple and Samar to each other, Barkha receives a courier and gets shocked to see the same message.

Barkha shows the threat to everyone which causes an anxious situation in the household.

Anuj, Samar, and Ankush rush outside to catch the person who came to deliver it but find no one there.

Anuj informs the police about the threats and asks them to increase the security around the family.

At the same time, Kinjal and Kavya learn about the same messages they had received and conclude that they are related to Dimple’s case.

Kavya and Kinjal decide not to tell anything to Leela as if she would pressurize Anupama to take back the case.

Later, Kinjal and Kavya video call Anupama and Anuj and ask about the condition of their household.

Kinjal tells Anupama to come to their house as they want to meet her.

Anupama worries about Anu but Anuj assures her that Anu is safe at the camp with increased security.

Anuj asks Anupama to go and meet them once as they are missing her very much while he and the others will take care of Dimple.

Barkha tells Dimple that despite the danger she is not scared because of her and assures her that they are there for her in this fight.

Anupama arrives at the Shah household and gets to know about the threat letters received by Kavya and Kinjal.

As Anupama says that she will not back out after hearing the threats, Leela appears and asks her if she wishes to put the whole family in danger.

Leela asks Anupama to take back the case as she does not want the whole family to be in danger for some stranger.

© Copyright tellybest.com, 2022, 2023. All Rights Reserved. Unauthorized use and/or duplication of any material from tellybest.com without written permission is strictly prohibited.
Cached Saved on: Sunday 27th of November 2022 11:56:40 PMCached Disp on: Tuesday 6th of December 2022 12:03:16 PM