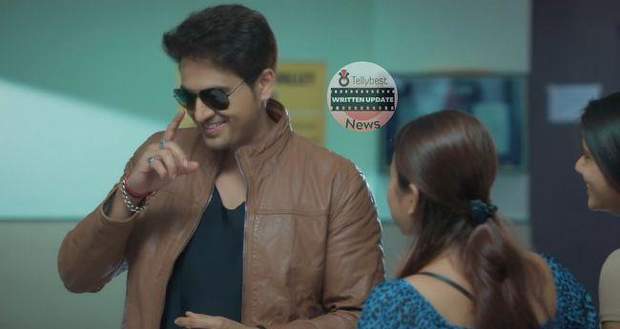 Anupama goes outside the classroom after getting the teacher’s permission and picks up the call asking what the matter is.

Vanraj asks Anupama to come to Shah’s house immediately as he needs to talk to her about Pakhi.

Anupama replies that she is not going to come as it is her college hours and she is busy attending her lectures.

Hearing that, Vanraj says that Anupama is giving more importance to her college than her daughter and does not care for her.

Anupama tells Vanraj that Pakhi is not a child who needs her assistance 24/7 and asks him to handle the situation as Pakhi’s father.

Warning Vanraj not to disturb her anymore, Anupama hangs up the call and returns to the class while Vanraj fumes in anger.

Vanraj tells Leela how Anupama’s attitude has changed since she joined her college to which Leela agrees.

Taking this opportunity, Vanraj decides that he will decide about Pakhi by himself.

Leela says that she was right to make Anupama leave her studies after marriage as going to college would result in something like this.

After the class gets over, Anupama comes out with her classmates and teacher while Anuj peaks at her from a corner.

While passing by Anuj, Anupama throughs a paper ball toward him which turns out to be a love letter.

Anupama tells Anuj in the letter that she is aware of Anuj’s presence and confesses that she loves him.

Reading that letter makes Anuj jump with joy as his wish for college romance is transforming into truth.

Anupama and her classmates gossip about things while sitting together outside and Anupama expresses that as a special moment for her.

While Anupama shares her lunch with others and laughs while talking about several things, Anuj takes a polaroid photo of her.

Meanwhile, Adhik bursts into anger at Barkha after discovering her visit to the Shah household.

Barkha says that she does not want Pakhi to become Adhik’s wife and did it for them but Adhik does not listen.

Adhik says that he will do whatever he wants from now on and will marry Pakhi only in this life.

After college gets over, Anupama comes to Anuj and thanks him for always supporting her and plants a kiss on his cheek.

Anuj gifts the polaroid photo to Anupama as a special present and requests her to get on his bike so they can go home.

At home, Anu tells Anupama a poem about her first day at college, which impresses her.

Later, as Anupama and Anuj prepare sweets for Diwali, Leela calls her and screams at her to come to the Shah house.

Anuj asks Anupama to go but Anupama refuses as she wants Vanraj and Leela to understand that she has a life of her own with her separate family.

Hasmukh requests Anupama to come there for a bit which changes her mind at last.

© Copyright tellybest.com, 2022, 2023. All Rights Reserved. Unauthorized use and/or duplication of any material from tellybest.com without written permission is strictly prohibited.
Cached Saved on: Monday 21st of November 2022 11:16:51 AMCached Disp on: Monday 5th of December 2022 12:12:40 AM