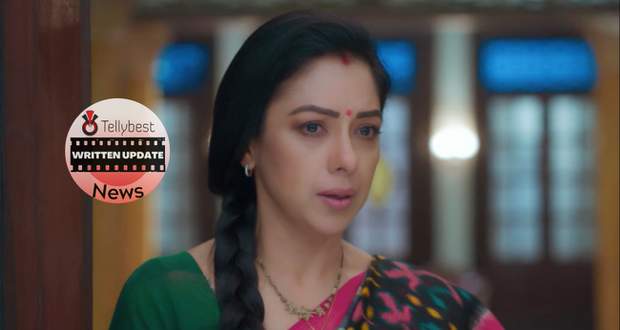 Today's Anupama 27th September 2022 episode starts with Anupama suggesting to Paritosh to take a sharper knife which is in the kitchen.

He accuses Anupama of destroying his life and asks her to kill him with her own hands while Anupama declares this is a fake drama to threaten everyone.

Anupama shouts at Paritosh for making everyone upset while speeches about men's behavior of making mistakes and then apologizing to make her forget everything.

Meanwhile, Leela says bad things about Anupama, making Hasmukh get angry at her.

Anupama criticizes Paritosh for first making mistakes and then scaring everyone so that they forget his mistake and accept him.

She tries to explain the real meaning of manhood that is by accepting one's own mistakes.

Anupama asks him to get out of the house but Paritosh starts falling off the things to create an uproar.

Anuj bursts in anger and grabs him around to warn him not to hurt Anupama or he will surely kill him.

Anuj makes a call to Vanraj to inform him about Paritosh’s presence at Kapadia’s house and complains about his deeds of being drunk and misbehaving.

He asks him to arrive home or he will send Paritosh behind the bars.

Meanwhile, Kinjal in a room with Arya expresses her grief by apologizing to Arya that her castle of dreams is shattered now by her own dad.

She cries saying that now she will take the decision as a mother, not as a wife.

However, Barkha gets to know about Vanraj coming over there as she doesn't want to miss this part of the drama saying it is an interesting one.

Vanraj asks Paritosh to go from there and apologizes to Anuj for his misbehaving.

Paritosh denies going back without Kinjal but Vanraj drags him to take him along.

Moreover, Anuj doesn't listen to Anupama's sorry and this makes Barkha and her trio happy.

After a while, Paritosh is brought back to Shah's house in a drunken state.

Hasmukh consoles a crying Vanraj who is tired of all the circumstances.

Vanraj realizes how Hasmukh has suffered even when he has left his house.

He admits his anger for Paritosh but can't see him in pain as he is a father who feels bad for his child’s sorrow.

Meanwhile, Anupama gives meds to Anuj while he confirms by holding her saree's end that he is not angry with her but with this drama and circumstances.

They both hug each other tightly.

© Copyright tellybest.com, 2022, 2023. All Rights Reserved. Unauthorized use and/or duplication of any material from tellybest.com without written permission is strictly prohibited.
Cached Saved on: Monday 21st of November 2022 03:40:44 AMCached Disp on: Tuesday 29th of November 2022 12:07:22 AM