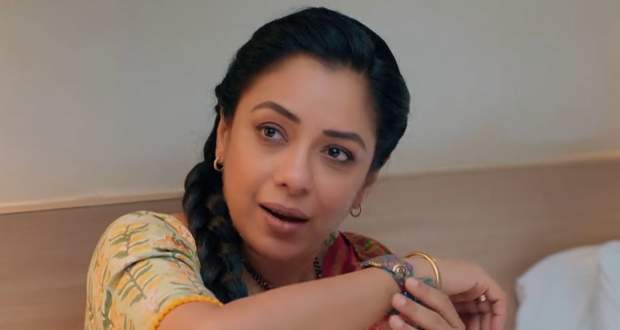 Today's Anupama 28 April 2021 episode starts with Advait giving rose petals infused bracelet to Anupama and joking with her and Nandani.

He advises her to not stress about others and think more about herself which creates a light argument between the two.

He goes on saying that he will come back once the reports come back.

Advait gets Anupama's reports and tells the lady to get Vanraj.

Anupama gets worried about her reports and hopes to go home soon while Nandani calms her.

Advait informs Vanraj that Anupama's ovary has a tumour and that she is chronically ill.

Samar overhears them and runs while Vanraj rushes after him.

He cries while Vanraj calms him and they have an emotional talk.

Samar seeks reassurance from Vanraj while he starts crying on his lap.

Kavya sees them from afar and leaves.

© Copyright tellybest.com, 2020, 2021. All Rights Reserved. Unauthorized use and/or duplication of any material from tellybest.com without written permission is strictly prohibited.
Cached Saved on: Monday 29th of November 2021 07:46:58 PMCached Disp on: Wednesday 1st of December 2021 03:15:56 PM