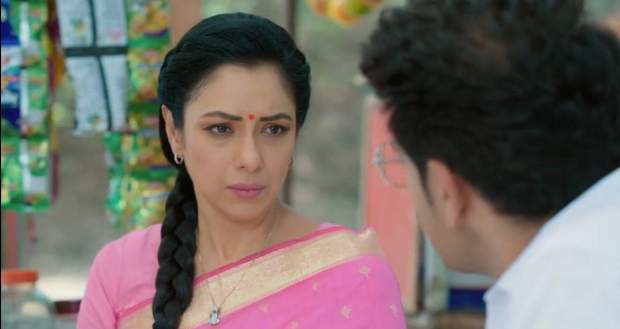 Today's Anupama 28th April 2022 episode starts with GK asking Devika why she sacrificed her project for the sake of Anupama’s marriage.

Devika tells GK that Anupama has done more than anything that a friend can do for her and she wants to fulfill her responsibility as a friend now.

Just then, GK gets a call from someone and leaves with a worried face on hearing the person on the other side.

Meanwhile, Kavya and Leela insist Vanraj not interfere with Anuj and Anupama’s marriage as it calls for trouble for them.

Vanraj does not cater to their requests and swears to make Anupama suffer during this whole marriage.

At the same time, GK meets Hasmukh at a park and comes to know about Hasmukh’s health condition after he promises that he will not tell anyone.

GK strongly protests against Hasmukh hiding the condition of his health but gets insisted on Hasmukh’s promise.

Seeing Hasmukh suffering alone, GK proposes to take him to the best doctor at his own expense and drives Hasmukh there.

Anuj spots GK driving Hasmukh out of the park and runs to stop them but fails on catching up.

Meanwhile, the venue of the engagement lightens up with all the family members appearing to attend the function.

Elsewhere, Hasmukh and GK get to know from the doctor that Hasmukh has to go through surgery as soon as possible to prevent danger to his health.

Hasmukh requests the doctor to postpone the surgery for at least 10 days as his presence is needed in Anupama’s marriage.

The doctor agrees but stresses the fact that anything can happen to Hasmukh in these 10 days.

Back at the Shah residence, Anupama waits after getting dolled up while Anuj makes his entry with drums and music.