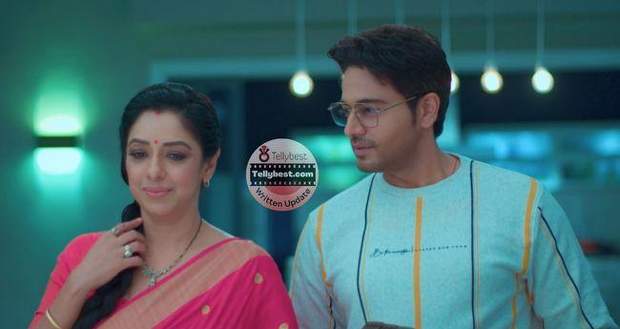 Today's Anupama 28th December 2022 episode starts with Anuj going to the stage and starting his performance while Anupama stops her car at the red signal.

Anuj entertains everyone with his singing of the song “Om Shanti Om” and checks on Anu occasionally.

Anu continues to cry as Anupama still has not arrived.

Barkha tells Ankush that she knew that Leela would make Anupama late and that is exactly what is happening currently.

After Anuj’s performance ends, the anchor announces the start of the performances of the junior students with their parents.

The first performance starts while Anuj tries to calm down Anu by saying that Anupama is coming.

Anupama finds the route to the venue closed due to some construction work and takes a long way there.

As the second performance starts, Anuj gets frustrated and puts on an angry face as if he had enough of that situation.

The anchor announces Anu and Anupama’s entry on the stage for the performances but signals to her that Anupama has not arrived yet.

Hearing that, the anchor announces that Anu and Anupama will not be able to perform and moves on to the next performance.

Anuj takes Anu in his arms and goes inside while she cries because Anupama broke her promise.

After all the performances get over, Anupama arrives and asks for a mike to speak herself out on the stage.

Anupama says that it is her fault for being late and explains that a woman has many roles and responsibilities to fulfill.

Anupama asks the judges to give her and Anu a chance to perform together on that stage even though the competition is over.

Anu runs to Anupama and hugs her while Anupama apologizes to her for being late.

However, Anuj diverts his eyes from Anupama as she stares at him which makes Anupama anxious.

The judges allow Anupama and Anu to perform and they present their dance on the stage.

Still, Anu does not get to win any position or prize as she got disqualified from the competition.

Anu stares at the winner with sad eyes while Anupama asks her to be happy for the winner even if it is not her.

Anuj gets irritated upon hearing Anupama’s words but remains silent with a fake smile on his face.

As Anupama holds Anuj’s hands silently, he withdraws his hands without even looking at Anupama.

Anupama understands that Anuj has got hurt by her behavior and gets nervous thinking about what is yet to come.