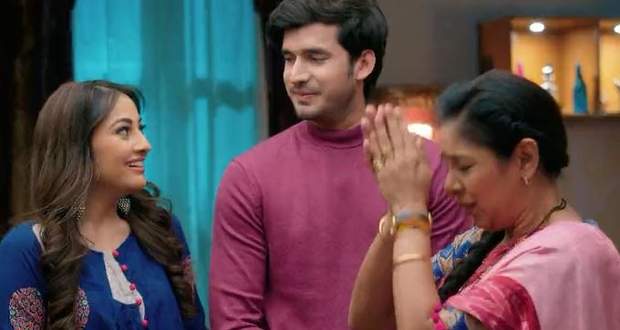 Meanwhile, Rakhi offers a clerk position to Vanraj in her coaching center to degrade the Shahs while Leela gets furious at Rakhi.

At the same time, Anupama tells Rakhi not to worry about their financial matters as Kinjal and Paritosh have the Campus selection the next day.

On the other hand, Paritosh asks Rakhi whether the MD post at her coaching center is still open for him while Rakhi says that he is always welcome there.

Later, Kinjal and Paritosh get into an argument while Paritosh says that he should find a job at any cost as he has so many responsibilities in the house in Vanraj's absence.

Elsewhere, Kavya pacifies Vanraj for dealing with patience at his office the next day. Meanwhile, Anupama gets excited about giving a performance at Sweety's school along with catering.

Sweety further tells informs Vanraj that she doesn't want to compete with Anupama at the Annual day performance in her school. Kavya supported Sweety and says that she will help Sweety with her act.

Meanwhile, Samar gets worried about Nandini when she faints as she is starving from that morning and Anupama notices Samar being emotional for Nandini.

Simultaneously, Kinjal arrives at home with the good news that she is selected for a job in her campus selection while the Shahs are happy to hear that.

In the meantime, Vanraj argues with his superiors at his office and challenges them that they can't bring a substitute in Vanraj's place.