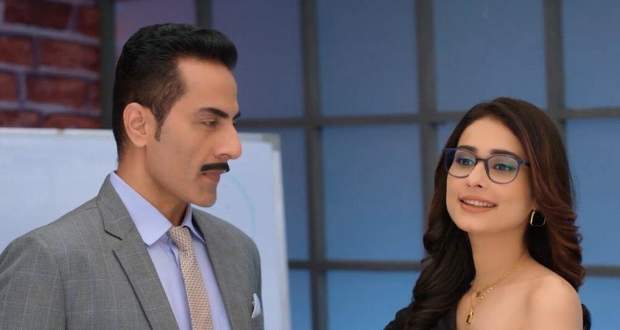 Today's Anupama 28 Jan episode starts with Vanraj passing through Anupama and Kavya while thinking about controlling Malvika through his words in the future.

Kavya asks Anupama what she will do if Vanraj moves away from this office, Anupama replies that she is not the babysitter of either of them.

She will help Kavya to the extent she can but the ultimate job has to be done by Kavya herself, Vanraj eavesdrops on their conversation and glares in anger.

Meanwhile, Samar and Nandini sit together and decide that they can’t live away from each other no matter the situation.

Both of them confess their love for the other and hug dismissing their fight while promising to give their relationship a fair second chance.

Afterward, Anupama informs Anuj that she is going to the Shahs’ house for some time, Anuj gets a bit upset and asks her to return as soon as possible.

He gives Anupama his car keys which she and Kavya leave for home, Malvika comes and teases Anuj about Anupama.

On reaching home, Anupama and Kavya see Vanraj there sitting and waiting for them to start the fight.

Vanraj blames Anupama for giving Kavya the job at the same office and tells everyone that they are making it suffocating for him to breathe.

Anupama asks Vanraj to stop trying to act like a victim when, in reality, nobody has done anything to him.

She reminds Vanraj of how pathetic of a person he originally was and his past behavior with her.

Vanraj, however, mocks the friendship between Anupama and Kavya and blames them for planning to destroy his success as they can’t see him and Malvika together.

Hearing this, Anupama shoots blames on Vanraj for always subjectifying his wife with sympathy and weak, Kavya also defends Anupama.

On one hand, Vanraj plans to drop a bomb through Malvika while on the other hand, Anupama determines to stop Vanraj from dragging Malvika in his greed.

Anupama Precap: Anuj shows Anupama the rose that he stored for the past 26 years, Malvika tells Anuj that she will change their office if Vanraj faces any problem.