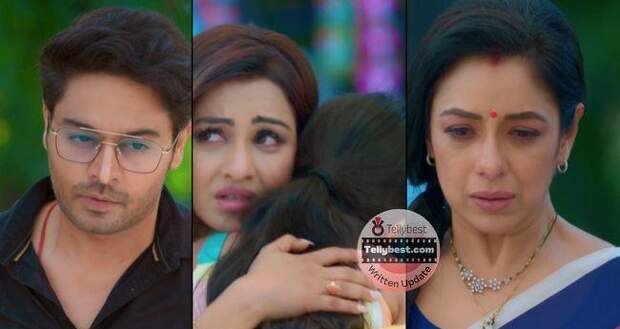 Today's Anupama 28th January 2023 episode starts with Anuj bringing Anu into her room and asking her not to worry about anything as he will not let her get away from him.

Anuj leaves while Anu wonders with whom she will live from now on if Maaya is her biological mother.

Barkha and Ankush ask Maaya how they can easily accept that Maaya is Anu’s biological mother as many people can act as fraud.

Anuj comes and says that no more words need to be said as he will not let Maya come closer to his daughter.

Maya tells Anuj that she will not give up without bringing Anu with her no matter what Anuj tries to do against her.

Maaya says that she does not need to justify herself as she is not wrong in her claim.

Barkha and Ankush ask Maya why she left Anu years ago and asks if Anu is actually an illegitimate child.

Maaya tells Ankush not to talk about legitimacy as he himself has an illegitimate son with whom he wants to spend more time but is not able to do so because of his wife.

Anupama asks Maya how she knows that thing about her family while Ankush says that they need to dig out Maaya’s past.

As Maaya says that she will take Anu with her to London in the next 15 days, Anuj and Anupama’s hearts sink deeper.

Anuj asks Maya to go to court, the police, etc. as he will do everything possible to keep his daughter to himself.

Meanwhile, Anu stares at her polaroids with both Anuj-Anupama and Maaya and asks herself whom she has to choose between them.

Anu gets scared as she thinks that she would be sent back to the ashram.

Anuj announces that Maaya has to fight him as Anu’s dad which will not be easy.

Anuj says that although fathers’ love is not celebrated in scriptures and poems, they love their children as much as their mothers.

As Anuj and Maaya fight with each other, Anupama stops them from behaving like that and says that they should act maturely as it involves their daughter.

Anupama tells Maya that whatever she did with Anu just now was very wrong.

A mother is never compared based on her blood relation, age, ethnicity, etc. as she is always the “mother” regardless of anything.

Anupama says that she does not consider Maaya anything less than herself so Maaya should also act accordingly.

Giving Yashoda’s example, Anupama says that the mother that raises her child can never be diminished by any means.

Anupama questions Maaya about how she acted with Any earlier and suddenly dropped such a big truth on her shoulders.

When she and Anuj were shocked after hearing the truth, one cannot imagine the pain Anu is going through right now.

Anupama talks about the court fight and says that she does not want to do that as Anu will get hurt the most through that method.

Maaya requests Anupama as a fellow mother while Anuj says that Anu will stay away from Maya from now on.

Maaya tells them that she wants to talk to Anu for the last time before leaving and will just watch her if she is sleeping.

Anuj refuses while Anupama agrees to let Maaya go to Anu and gives her the direction to the room.

While Maya caresses a sleeping Anu emotionally, Anuj bursts into anger over Anupama and asks her why she let Maaya meet Anu again.

© Copyright tellybest.com, 2022, 2023. All Rights Reserved. Unauthorized use and/or duplication of any material from tellybest.com without written permission is strictly prohibited.
Cached Saved on: Saturday 28th of January 2023 11:54:13 PMCached Disp on: Tuesday 31st of January 2023 06:28:44 PM