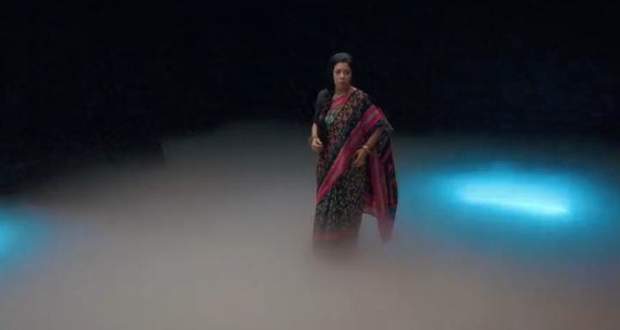 Today's Anupama 28th July 2022 episode starts with Anupama explaining how every ritual has a scientific logic to Anu and then Anuj tells Anu that she is going to visit her grandparents today so that she feels better.

Later, Adhik and Pakhi express their love for each other over a video call and Pakhi decides to meet him after college.

Anuj firmly requests Barkha to not interfere between Pakhi and Anupama and also warns Adhik to look out for his deeds.

Anuj suggests Ankush to involve Adhik in the business so that he stays occupied.

At the Shah house, Kinjal helps Pakhi to get ready for college and meanwhile, Vanraj tells Pakhi that she can go wherever she wants to.

Meanwhile, Baa tells him that it's not safe for him to trust Pakhi over this. However, he requests Baa not to worry about it.

Whereas, Anuj decks Anupama up and they share a good time and discuss that it was important to warn Adhik, Barkha and Ankush so that they don’t create any scene.

Ankush eavesdrops on their conversation and is worried about what Anuj and Anupama were talking about.

At the Shah house, Rakhi Dave pays a visit. Baa is unhappy to see her and they both mock each other.

Kinjal’s happiness is short-lived when she gets to know that Rakhi has booked a maternity suite for her.

Kinjal surges her mother for treating her as a kid and tells everyone how independent she is and needs nobody to look after her. She requests Baa not to pick fights unnecessarily.

Rakhi decides to live with the Shah’s till Kinjal’s pregnancy to take care of her.

Anu enters the Shah house with balloons, all excited. Rakhi is unaware of who’s child she is.

She continues to adore her but it soon turns out to be a shocker for Rakhi when Anu addresses Anupama as her mother.

Pakhi boils up to see Anupama and Anu at their house in the very morning. She disobeys Anupama and tells her to leave.

She also expresses how she is tired of her drama of trying to be the most devoted mother when in reality she is a disgrace to the community.

However, Kavya takes a stand for Anupama and asks Pakhi to stop shifting according to her convenience.