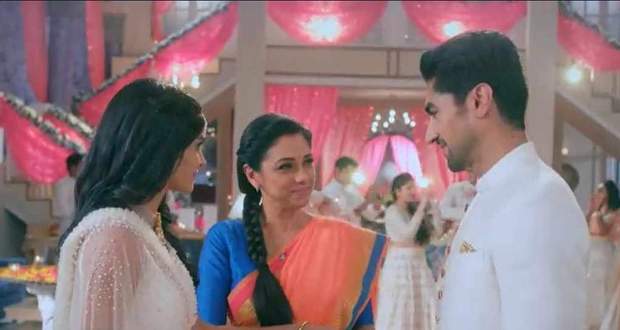 Today's Anupama 28th March 2022 episode starts with Hasmukh and Samar admiring Anupama’s winner trophy as they showcase it with flowers.

Samar expresses his happiness on seeing Anupama announce the news of her marriage to Anuj in front of everybody.

Seeing them decorating the trophy, Vanraj gets irritated while Rakhi joins to fuel his anger by saying that the trophy symbolizes his defeat.

Meanwhile, Pakhi and Toshu question Anupama’s motherhood after hearing her announcement as they have to face taunts and embarrassment from their friends.

Leela boils in anger and determines to teach Anupama a lesson the instant she steps into that house.

Later, Rakhi comes to Kavya and scratches her insecure parts to make her anxious.

Rakhi asks why nobody cares to initiate the talk of Kavya being a mother as she also would want to start her own family.

As Kavya gets into a deep thought hearing Rakhi, Rakhi suggests Kavya get a divorce from Vanraj if he fails to keep his job at Malavika’s company.

At night, Samar gets a message from Anupama regarding her return and informs Hasmukh and Kinjal that the family war is about to begin.

Anupama prepares herself to answer all the questions of the family members when Anuj’s call brightens up her mood.

Sending his best wishes and love, Anuj encourages Anupama to fight for their love and win but also regrets not being there with her.

Anupama assures that she will fight this war for her rights in her life and win for sure.

On the other hand, Hasmukh warns Leela not to stoop so low that she cannot get up but Leela swears to go to any lengths to protect her family.

Anupama reaches the house and notices the darkness residing everywhere as she prepares to face her family and children.