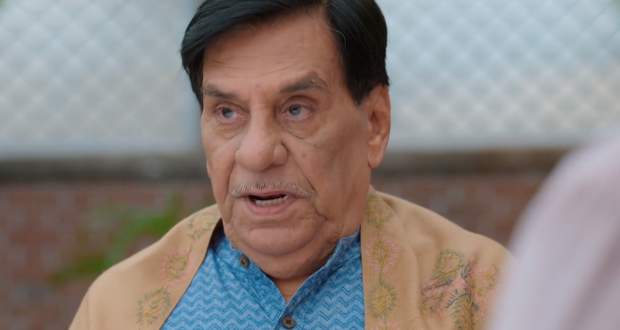 Dolly thinks men do get distracted and that they have this nature. Anupama is hurt and calls her old-fashioned. Dolly still thinks only a wife can save the family.

Anupama thinks men make mistakes because someone or the other protects them. Sanjay supports Anupama and says he will always be there for her.

Nandini and Samar share an awkward moment remembering the night before. Nandini asks about his family while Samar says the situation is very bad.

Kavya asks Vanraj to come to her home while Vanraj says he needs to stay with the family and console his parents and kids.

Anupama takes care of Baa and Bapuji and asks them to start the new day with a smile. She massages Hasmukh’s feet when Vanraj also comes there to touch his feet.

Bapuji removes his feet from the table and states that he has taken a decision. He says that Vanraj will not be staying in his house and can stay anywhere else.

He goes into his room while Baa opposes his decision. She says that he is their blood and the society will question them.

Baa says he will bring him on the right track while Bapuji says that Vanraj is not the right man. He says that he will change the mentality of people and support what is right.

Pakhi gets really upset and states that she hates Vanraj. Vanraj expects Paritosh to take his side but he is not ready to get manipulated again.

Paritosh is upset with himself for taking his side. He says that his reasons are not justified as Baa and Anupama are the same but he never changed his mother.

Paritosh states that he can never forgive him again. Meanwhile, Pakhi wants to stay with both her parents.

© Copyright tellybest.com, 2020, 2021. All Rights Reserved. Unauthorized use and/or duplication of any material from tellybest.com without written permission is strictly prohibited.
Cached Saved on: Thursday 28th of January 2021 07:31:04 PM