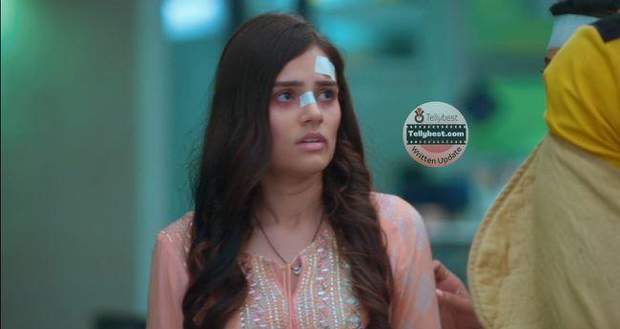 Today's Anupama 28th November 2022 episode starts with Leela asking Anupama to step back from the case so that no harm is done to their family.

Kavya and Kinjal point out that the boys want them to get scared and hide away through these messages so that they can continue their rampage with other people.

Samar tells Leela that they should think about Dimple once as she is the one who is suffering daily after that incident.

Anupama explains to Leela that she cannot step back as a human and woman as that would be the same as those monstrous culprits.

Leela warns Anupama that they are at the target with so many women in the house when even Vanraj is also not present at home.

Anupama says that she and Anuj will make arrangements for the protection of the family members but they need to be united in such a situation.

Leela does not listen to any words of Anupama and begs her to take back her case as she does not want any danger lurking in her family.

However, Anupama declines Leela’s request and tells her that she cannot leave the field once she has stepped in for the fight.

Kinjal gives the example of girls that live alone in cities for jobs and cities and have to live in fear of incidents like this every day.

Everyone except Leela pledges their support for Dimple and assures Anupama that they are by her side in this fight.

Anupama feels blessed to get the support of so many family members while Leela still asks Anupama to rethink her decision.

With the support of family members and the resistance of Leela, Anupama leaves the Shah household to return home.

Meanwhile, Pakhi meets her friend and shows off how she is living a lavishing lifestyle after marrying Adhik.

Suddenly, Pakhi feels someone spying on her and looks behind but finds no one there.

Later, as Anupama is on her way to the Kapadia mansion, the car stops due to the heating up of the engine.

The driver tells Anupama that it will take time to repair the car, so Anupama decides to take an auto home.

Some bikers appear on both sides of the auto and spray something on Anupama’s face which makes her eyes burn.

Meanwhile, Anuj worries about Anupama’s condition after learning that she is coming home by auto.

Anupama groans in pain while one of the bikers pulls her hair from outside.

Mustering courage, Anupama hits both bikers which makes them crash their bikes and the auto continues to go out of their reach.

However, the auto stops due to some problem, and the driver asks Anupama to run away.

Anupama starts running but the bikers catch up to her and make her fall to the ground by pulling on her saree.

They warn Anupama about her entire family containing many women and say that they have the possibility of going through the same thing as Dimple.

After asking Anupama to throw Dimple out of her house, the bikers leave with a traumatized Anupama alone on the streets.

© Copyright tellybest.com, 2022, 2023. All Rights Reserved. Unauthorized use and/or duplication of any material from tellybest.com without written permission is strictly prohibited.
Cached Saved on: Wednesday 25th of January 2023 09:29:22 AMCached Disp on: Sunday 5th of February 2023 03:23:14 AM