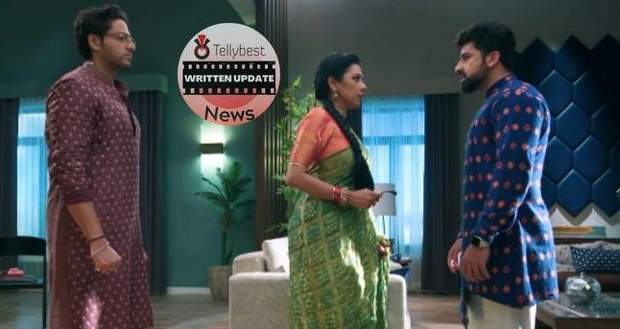 Meanwhile, Anuj asks Anupama to draw a line to these circumstances as he wants Kinjal and Arya to live as long as they want but he doesn't like the daily dramas.

Moreover, he asks Anupama to fight these circumstances in a brave manner.

At the same time, Leela convinces Vanraj to bring Kinjal back as he has created a scene today at Anupama’s house but later can do it anywhere.

At Kapadia’s house, Anuj and Anu are leaving home while he asks Anupama to stop worrying for him but Anupama being a caring wife says that even the sun and moon can stop working but she can't stop caring for him.

Arya stops crying after hearing Leela’s poem for her while Vanraj asks Kinjal to have a conversation.

Vanraj pleads with Kinjal not to break her relationship with the family for Paritosh’s mistake.

He insists on her coming back home as it's their family issue and they will solve it on their own.

Vanraj even assures her that he will stand with her in any decision as Hasmukh has supported Anupama.

However, Leela informs Kinjal about Paritosh’s situation and his constant calls for her and Arya in a drunken state.

Kinjal is left in a confused state while Anupama recalls her past resemblance.

At the same time, Hasmukh asks about Leela and Vanraj from Kavya and feels angry knowing their visit to Anupama’s house as he knows they will create problems for Kinjal and Anupama.

Meanwhile, Anupama tells herself that now she has to cross the line and asks Vanraj and Leela not to pressurize Kinjal whereas Kinjal is still broken and advises them to give her some more time.

Hearing Anupama, Vanraj shouts to shut her mouth and not to interfere between a father and a daughter.

She tries to explain but he says that like her, he also wants to make Kinjal explain.

However, Leela gets a chance to taunt Anupama again about blackmailing Kinjal with sweet words.

Anupama asks Kinjal to decide but not under pressure while Vanraj disagrees with her.

On disagreeing, Vanraj says that it's their family matter while Anupama corrects him saying it's their children's matter.

At the same time, Anupama announces that the decision will only be taken by Kinjal as it is her right.

© Copyright tellybest.com, 2022, 2023. All Rights Reserved. Unauthorized use and/or duplication of any material from tellybest.com without written permission is strictly prohibited.
Cached Saved on: Monday 21st of November 2022 07:04:12 AMCached Disp on: Tuesday 29th of November 2022 12:37:58 AM