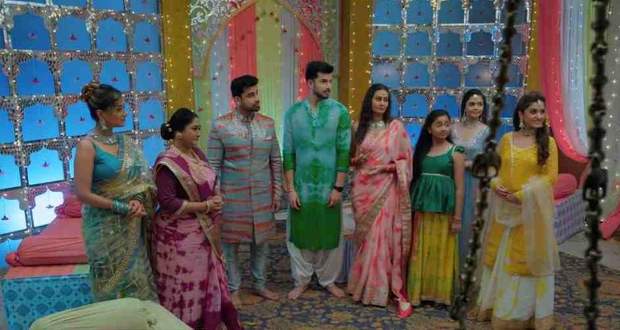 Today's Anupama 29th April 2022 episode starts with Anuj and his side of people coming into the Shah house with dance and music.

Vanraj and Leela burn inside seeing others dance while Kavya regrets her marriage being so bland in the past.

Rakhi Dave teases Vanraj and Leela at every opportunity and relishes their weeded faces.

Seeing Anupama’s mother beating the dholak, Leela tries to make fun of her but gets shunned by her savage reply.

Anupama’s mother makes it clear that there is no reason that she will stay silent and lower her head in front of Leela anymore.

Hasmukh comes and welcomes everyone while GK quietly checks upon his health.

Meanwhile, Anupama waits for the others to call her so that she can see Anuj in his handsome avatar.

Looking at her face, Anupama gets a bit insecure and lets out a sigh when Anuj declares that she is perfect while standing behind her.

Anupama gets surprised to see Anuj and gets hooked on him as she notices his grand appearance.

Coming to Anupama, Anuj admires Anupama’s dolled-up look with hearts in his eyes.

Elsewhere, Rakhi tries to mock Anuj going upstairs to fetch Anupama but gets stopped by Devika and Malvika.

Leela tries calling her mother when Jignesh comes and informs her that their mother will not come here.

Shocking Leela to her core, Jignesh tells her that their mother refused to come when he told her what Leela’s intention was behind calling her.

Leela gets angry hearing Jignesh while he warns Leela not to interfere in Anuj and Anupama’s engagement anymore.

Anuj and Anupama make their grand entry through the stairs with rose petals showering over them and everyone cheering for the couple.

They reach the spot for the function and giggle to themselves with the excitement of getting engaged to their loved ones.