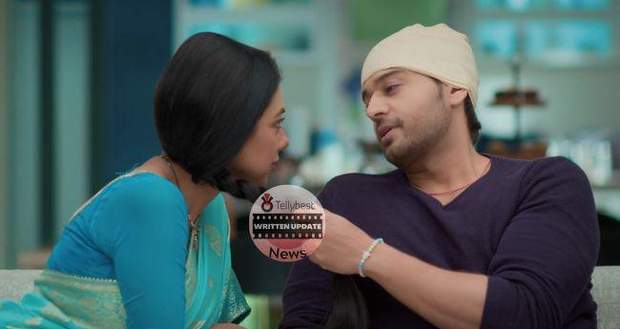 Today's Anupama 29th August 2022 episode starts with Anuj and Anupama present in the living room when suddenly Choti and GK come in with a bunch of various types of flowers for decoration.

Anuj and Anupama get surprised and ask them why did they bring the materials for decoration already.

Choti Anu replies that last year when she was in the orphanage she decorated the orphan beautifully and thus she made a wish to decorate it again the next year in her parents house.

Anuj says that she is too cute and begins pampering her.

Suddenly Barkha, Adhik, and Ankush come in showcasing their involvement but Anuj gives them cold looks so an anxious Anupama requests them to go away.

Later Barkha wonders that Anuj and Anupama are weak and thus to win their trust back Ankush should go to the office and be his support there so Anuj feels Ankush's support.

Meanwhile, Choti asks Anuj why adults do not befriend each other so easily like how children do after a fight.

On this, Anuj realizes that he should not snatch away Choti's dream because of their adult matters and tells her to send an invitation to the Shahs in her style.

He further tells her the story of a race between Ganesha and Kartikey and explains that Ganesha took circles around his parents because they are his world.

On hearing this, Choti begins circling Anuj and Anupama cutely.

The Shahs get an invitation from Choti and Vanraj begins feeling conscious when Anuj calls him and asks him to forget everything and start anew this Ganesh Chaturthi.

Vanraj readily accepts and later tells Ba that they are going there for Anuj, Choti and Anupama therefore, they are going to ignore the rest three (Barkha, Ankush, Adhik).

On the other hand, Anuj tries making sculptures of Ganesha at Anupama's request but feels demotivated.

Anupama sees him struggling and sits with him to help.

Together, Anuj and Anupama are able to make a perfect sculptor of Ganesha.

Meanwhile, Pakhi video calls Adhik and tells him how happy she is about getting invited on Ganesha Chaturthi.

Adhik reciprocates the same when suddenly Barkha comes from back being a little too nice than usual.

She thanks Pakhi for being with Adhik and forgiving them and wishes her family was also this understanding like her.

After the video call, Barkha appreciates Adhik for keeping Pakhi under control and Adhik says as long as Pakhi is with him, Anupama can not kick them out.