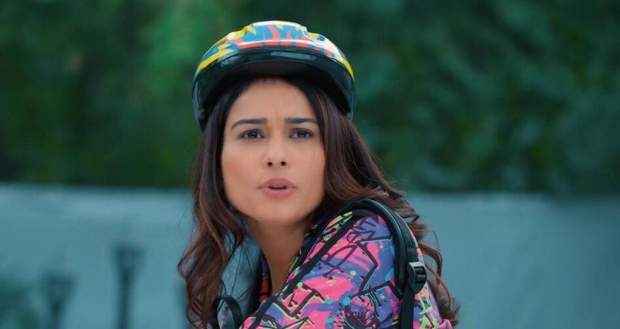 Today's Anupama 29 December 2021 episode starts with Anupama and Vanraj meeting each other at the office's break room.
Both help each other in their business works and have a light conversation between them.
They remember their past relationship and laugh at the extent to which their relationship has changed compared to earlier.
Vanraj tells Anupama that he knows Anuj has problems regarding his partnership with Malvika but promises her that he will only focus on work.
Anupama assures Vanraj to work sincerely and not let Anuj’s suspicions turn into reality.
Both depart as their partners call them, smiling at each other and getting engaged in their work.
Meanwhile, Anuj blames himself for questioning Malvika’s decision to transfer money and decides to gift the best Christmas gift to her.
Later, Anupama meets Malvika who invites her to the Christmas party at Shah’s residence along with Anuj and GK.
Malvika suddenly falls making Anupama worried as she helps her to get up.
Anuj comes and ties Malvika’s shoelace, she tells him she has a bicycle and leaves on that.
Before leaving, she asks Anuj and Anupama why they haven’t proposed marriage to each other, leaving them speechless.
Back at Shah’s residence, the family members engage in decorating the house for the Christmas party, Malvika convinces Leela to participate.
Leela also enjoys decorating the Christmas tree with others and when Malvika was about to fix the star on the top then Kavya does that shocking everyone.
On the other hand, Anuj plays a prank on Anupama about his finger being cut while helping her in cutting carrots for the cake.
Anupama cries thinking it was real which makes Anuj panic in guilt, he wipes away her tears and promises to not make any jokes like that again.

Upcoming Anupama episode updates: Malvika asks for Hasmukh's permission for Anuj and Anupama's marriage in front of other family members.