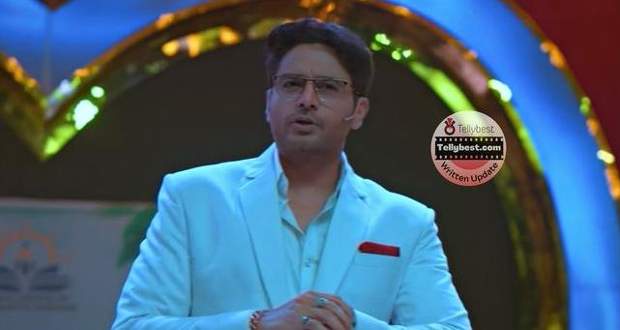 Today's Anupama 29th December 2022 episode starts with the Anupama, Anuj, and Anu coming down from the stage and meeting the family members.

Hasmukh, Adhik, and others congratulate Anupama and Anu for their performance and say that for them they are the true winners.

Anu says that if she was the winner then she would win the trophy, not Taniya and her mother.

Anuj looks pissed on hearing such a thing while Barkha asks Anupama why she got so late in reaching there.

However, as Anupama tries to present her reason, Anuj asks everyone to go home as it is very late.

Anupama tags along with Anuj and Anu while Hasmukh makes a worried face as he sees what is happening.

Anuj, Anupama, and Anu remain silent in the car when Anu tells Anupama that she cried a lot when she got late.

Anuj stops the car and tells Anu that she should get ice cream for her performance and goes out to buy it.

Anu asks Anuj to ask Anupama what flavor she wants to which Anupama says that he knows what she wants.

Anuj says that she should tell him what flavor she needs which upsets Anupama and she asks him to bring a strawberry ice cream.

Meanwhile, the others reach the Kapadia house and spot Leela lying on the sofa with Pari.

Leela asks them how the function was to which everyone remains silent.

Hasmukh tells Leela that Anupama reached late and asks her if she was the one who intentionally made Anupama late.

Leela gets in her defence mode and asks Hasmukh if Anupama said that to him.

Coming back, Anuj hands Anupama her ice cream while she apologizes for whatever happened earlier.

Anuj says that despite his repeated requests to Anupama, she prioritized making Leela’s khichdi over Anu’s performance.

Anupama tries to justify her being late but Anuj says that she could have asked someone else to stay back with Leela but she decided to do everything herself.

Anuj says that Anupama does not need to handle everything by herself all the time and this time her daughter needed her mother on time.

As Anupama says that she reached later and at least performed with Anu, Anuj widens his eyes and asks her if dancing was the main motto.

Anuj asks Anupama if she does not know how much winning a competition means to a child.

Anuj tells Anupama that Anu was standing alone in the green room while others had their parents accompany them.

If there was any other kid in place of Anu, they would have gotten angry with their parents but Anu did not even show an ounce of anger.

Anuj says that their daughter has become mature at an early age and he fears that she will lose her childhood.

Anupama accepts that she committed a mistake while Anuj says that he will not consider such a thing happening again.

Later, as Anu, Anuj, and Anupama return home, Leela asks Anu to go inside and tells Anuj that she was not the reason Anupama got late.

Anuj gives a look at Anupama as Leela says that Anupama got late because of herself while the others also come out.

As Leela says that the function was a mere thing from the start, Anuj gets offended and says that it was not mere.

© Copyright tellybest.com, 2022, 2023. All Rights Reserved. Unauthorized use and/or duplication of any material from tellybest.com without written permission is strictly prohibited.
Cached Saved on: Wednesday 25th of January 2023 09:51:27 AMCached Disp on: Wednesday 1st of February 2023 08:43:58 PM