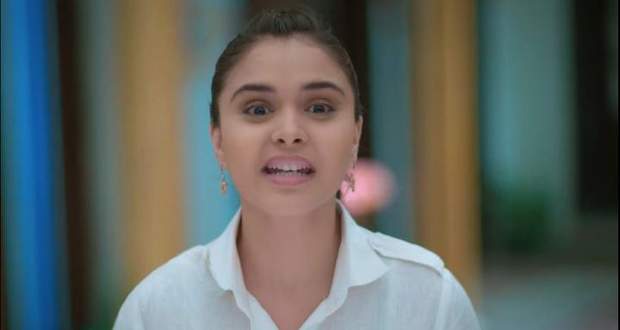 Today's Anupama 29th July 2022 episode starts with Pakhi creating a scene by humiliating Anupama and she requests Anu to go inside and play.

Everyone tells Pakhi to shut up and behave herself.

Anupama and Pakhi get into a heated argument. Kinjal, Baa and Kavya try to make Pakhi understand that she is wrong and should not misbehave like that.

Anupama takes a stand for herself and gives answers to each and every question that Pakhi has.

Pakhi makes a statement that Anupama is arrogant, selfish and insecure and compares Vanraj’s and Anuj’s equation with Anupama.

She also says how money, attention and power have changed everything leaving everyone dumbfounded.

Kavya remembers how Anupama took a stand for her when nobody did and thus, supports her by schooling Pakhi and asking her what's wrong with her.

She crosses her limit by attacking her personally and feels she pretends to be a devoted mother but in reality isn’t.

While Baapu Ji takes care of Anu and feels that heart connections are stronger than blood relations.

Toshu returns home and is shocked to see the atmosphere.

Pakhi takes a dig at Anupama’s past and calls it all a mistake and blames her for destroying the family.

Anupama questions, is Pakhi hurt by the fact that now she is happy and settled for real?

She feels that to be a qualified mother, a woman has to run after their children, take care of them, and have no time for their personal wishes.

Anupama requests Pakhi to please not do any favor to her and speak whatever she feels.

And Pakhi shamelessly reverts back with a statement that Anupama is a home breaker, not a maker and how she has ruined relationships by interfering so much.

Anupama is taken aback while Pakhi keeps on uttering nonsense.

The Shah family is astonished to see Pakhi being so arrogant and shameless.

Anupama is numb to hear all this whereas Anuj worries about her.

Kavya says how she has never seen such a useless and pointless kid.

Rakhi Dave defends Pakhi that her tone might be wrong but she has not said anything wrong.

Kavya tells Vanraj to stop Pakhi from misbehaving or else soon he is going to face the same wrath.

Toshu blames Anupama for all this high voltage drama to which Baa puts a stop by telling Anupama not to ever come here, leaving everyone shocked.

© Copyright tellybest.com, 2022, 2023. All Rights Reserved. Unauthorized use and/or duplication of any material from tellybest.com without written permission is strictly prohibited.
Cached Saved on: Monday 21st of November 2022 06:44:16 PMCached Disp on: Thursday 1st of December 2022 11:02:17 PM