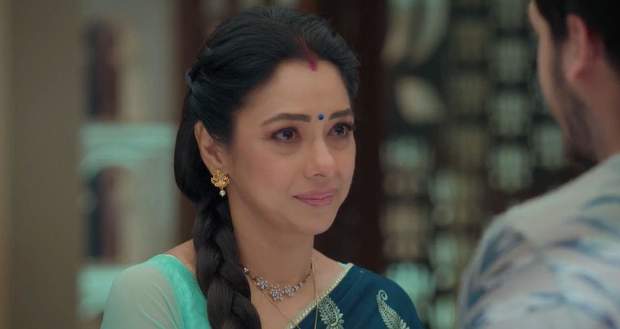 Today's Anupama 29th June 2022 episode starts with Pakhi asking Adhik if he is coming to the baby shower.

Adhik replies that he will come if she wants him at the baby shower to which Pakhi says 'yes'.

Leela asks Pakhi about who she was talking to on-call to which Pakhi says it is her friend but Leela gets skeptical.

Further, Anupama prays to run everything smoothly and welcomes Rakhi.

Rakhi brings gifts for Kinjal and asks Leela if she is okay with them and taunts about taking help from the Kapadias.

Further, Mamaji jokes around with Rakhi and lightens the mood by calling her beautiful.

Rakhi asks why the Kapadias have not arrived yet as they are high-class people and might be feeling odd to arrive at a middle-class house.

Later, Pakhi shouts that Buddy and his family have arrived.

Leela stands beside the gate to welcome the Kapadias and taunts Barkha that she is looking good in a saree as compared to her backless gown.

Further, Leela asks Barkha and her family to enter her house without shoes and says she should adjust her saree according to the level of the ground.

Barkha feels awkward but Anupama covers up and asks them to enter inside.

Ankush and Sara appreciate the decorations and layout of the Shah house while Barkha calls it small and cozy which feels like a taunt to Leela.

Leela says that having a small house has its own benefits and they don't need to call each other or keep a security guard outside.

Rakhi adds fuel to the fire by saying that small houses have nothing to steal which makes Barkha and Rakhi laugh together.

Further, Anupama introduces Rakhi and Barkha to each other where they shake hands and check each other out.

Anupama is stressed as all the three families are under one roof and discuss it with Hasmukh.

Anupama says that every relationship is dear to her and she doesn't want anyone to fight or create a scene at Kinjal's baby shower.

Hasmukh calms Anupama down by saying that she should not worry and carry a smile on her face as she cannot change what is bound to happen.

Rakhi tries to create drama by saying that Anupama and Barkha look so different from each other and one cannot figure out if they are from the same house.

Anuj replies back by saying it is true just like the difference between Kinjal and Rakhi as they are poles apart as well.

Later Dolly distributes the family badges to play games while Rakhi asks if Anuj will wear the badge of Dadaji.

Anuj denies this by saying Vanraj is the real grandfather of the baby and he can never replace Vanraj by any means.

Further, Barkha and Ankush get surprised as the badges state them as grandmother and grandfather while Leela taunts her again by saying it would be nice if it was written 'buddy backless grandmother' on it.