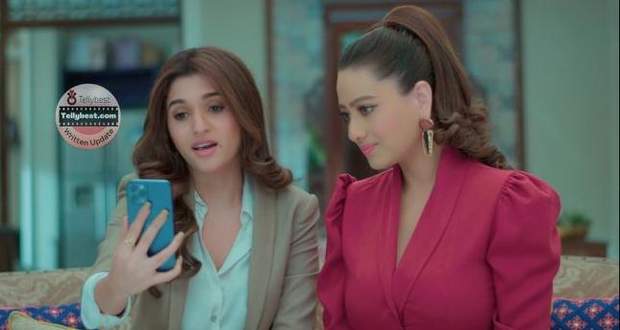 Today's Anupama 29th November 2022 episode starts with Anupama entering the house and calling Anuj while he worries about Anupama’s condition.

Anuj turns around, looks at Anupama’s disheveled state, and understands that something wrong has occurred on her way home.

Anupama hugs Anuj tightly while Ankush and Barkha ask Anuj to make Anupama sit and gives her water to drink.

With furious eyes, Anuj asks Anupama who did that to her to which Anupama explains the whole incident to everyone.

Anuj says that after hearing Anupama, he is determined to make those boys regret being born in this world.

Looking at Anuj and Anupama’s condition, Dimple says sorry for causing trouble to them and says that she should leave the house.

Anupama asks Dimple not to be apologetic when it is not her fault from any dimension.

Anupama tells everyone that she got scared after facing such a thing but she will not step back after getting frightened.

Anuj says that those molesters will win if Dimple decides to leave which they will not let happen.

Anuj tells Anupama that he is off to bring Anu home so that they can stay tension free about her.

Barkha takes Dimple inside to rest while Ankush calls the police to come and take Anupama’s statement.

Meanwhile, Vanraj returns to the Shah house and learns about Anupama’s decision to fight against those dangerous criminals by risking the family’s safety.

Samar, Kavya, Kinjal, and others try to convince Vanraj that they should not run away after getting scared but Vanraj silences them.

At the same time, Anupama gets to know that Dimple is a classical dancer but cannot dance anymore due to the pain.

Anupama and Dimple sit on the floor and coordinate with each other to dance with their hand gestures and body language.

Dimple smiles genuinely while dancing through her heart and hugs Anupama for making her feel so relieved.

Anupama tells Dimple that darkness comes into one’s life automatically but one has to find the source of light to enlighten themselves.

On the other hand, Adhik comes to the Shah house and informs everyone that Pakhi is unreachable since she left with her friend.

The men leave together to find Pakhi while the women continue to call her but nothing works.

Anupama meets Anu with a huge smile on her face and says that she has to say something to her.

Ankush tells Anupama that Anu is just a kid but Anupama says that it is more necessary to tell these things to kids first.

Anupama tells Anu that she should inform her and Anuj first if she feels anyone touching her in a bad way at any time.

Suddenly, Anupama gets a call from Samar and learns about Pakhi’s absence.

Later, Anupama and others wait outside the house for Vanraj and the others to return and see their car coming back.

Vanraj, Samar, Toshu, and Adhik get out of the car and inform them that they could not find Pakhi anywhere.

Just then, Pakhi comes running and hugs Adhik while shaking with fear.

Pakhi tells everyone how a cab driver was trying to take her to the wrong path but she luckily succeeded to escape from there.

Anupama hugs Pakhi and thanks God for saving her daughter while Vanraj asks her until when everyone is going to be safe.

© Copyright tellybest.com, 2022, 2023. All Rights Reserved. Unauthorized use and/or duplication of any material from tellybest.com without written permission is strictly prohibited.
Cached Saved on: Wednesday 25th of January 2023 02:30:17 PMCached Disp on: Monday 6th of February 2023 05:43:53 AM