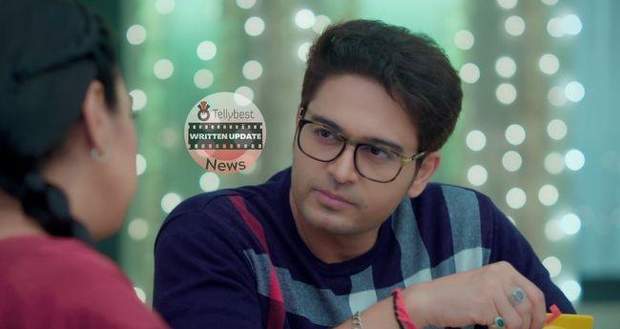 Today's Anupama 29th October 2022 episode starts with the starting of the Laxmi puja in both houses on the occasion of Diwali.

Kavya and Vanraj do the arti in the Shah house while Anupama, Anuj, and Anu do the arti together in the Kapadia mansion.

The diya flickers in between but both pairs guard it against getting extinguished.

After the puja gets over, everyone gets engaged in burning crackers when Vanraj reminds everyone how Pakhi always gets excited over Diwali.

Anupama, Anuj, and Anu arrive there and wish everyone a happy Diwali.

Anu gives everyone her handmade greeting cards, bringing a smile to their faces which soon fades away on seeing Ankush.

Anupama assures Vanraj that Adhik has not come with them and asks for Pakhi after not seeing her anywhere.

Vanraj tells Anupama that Pakhi is in a bad mood and is not coming out of her room.

Hearing that, Anupama goes to Pakhi’s room and asks her to enjoy Diwali with others as everyone is waiting for her.

Pakhi does not respond at all after several calls which scares Anupama and she informs others about that.

The men prepare to break the door when Anupama spots Pakhi and calls her name stopping everyone.

Pakhi appears at the house's gate with Adhik while wearing sindoor on her forehead and a mangalsutra on her neck.

Everyone freezes in their spots as Pakhi and Adhik come inside the house and announce that they are married now.

Pakhi says they did not have any option in front and decided to be together after marrying.

Hasmukh raises his voice and shuts up Pakhi while Vanraj falls to his knees with trembling eyes.

Anuj and Kavya help Vanraj to sit on a chair while Anupama reminds Pakhi that she asked for one day from her.

Anupama talks about the family’s Diwali getting ruined because of her haphazard step with Adhik.

Reminding Adhik of his conversation with Anuj, Anupama asks him where his maturity went when he was marrying Pakhi.

Anupama tells Pakhi that if she and Adhik tried to convince the whole family and proceed with the marriage, they would get the blessing.

Explaining how the new generation of youngsters lacks patience in their daily life, Anupama apologizes to Pakhi for asking her to wait for a day.

Anupama says that Pakhi thinks selfishly about herself without thinking about her family.

Further, Anupama asks Pakhi if Adhik’s love is the only true love whereas her parents are bad-wishers of her life.

Pakhi stands silently with Adhik while the family members stand with teary eyes and gloomy faces as the situation unfolds.

© Copyright tellybest.com, 2022, 2023. All Rights Reserved. Unauthorized use and/or duplication of any material from tellybest.com without written permission is strictly prohibited.
Cached Saved on: Monday 21st of November 2022 08:08:15 AMCached Disp on: Saturday 10th of December 2022 01:28:27 PM