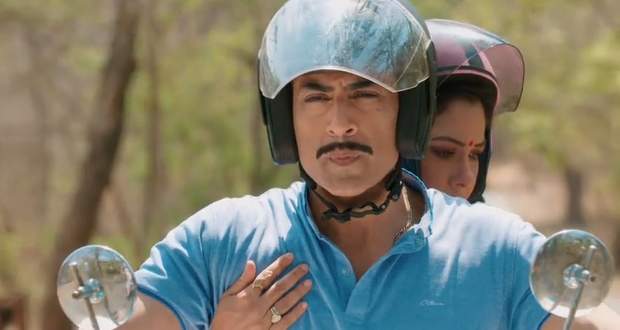 Kavya overheard a bit of their conversation and plans to find out Pakhi's intentions.

Meanwhile, Rakhi thinks that she needs to keep Anupama in the Shah house to keep her daughter safe from Kavya becoming her mother-in-law.

She calls Leela and they have a conversation while she reveals the plan of reuniting Vanraj and Anupama.

Elsewhere, Kavya warns Vanraj that his family is trying to separate him from her and says that she is silent only till he gets divorced.

Vanraj wonders why he didn't show the divorce papers to Kavya while Leela and Kavya pray to God that their plan gets successful.

Leela brings Anuoama downstairs while she gets embarrassed coming in front of them in a salwar suit.

The Shah's admire her and calm her while Vanraj appreciates her and asks her why didn't wear them earlier.

She remembers Vanraj telling her not to wear those types of clothes.

Leela tells Vanraj and Anupama that they are going on the bike as there isn't space for them in the car.

Kavya notices Vanraj and Anupama going on the bike while getting angry seeing that it is Pakhi's plan.

The Shah's are getting inside the car while Pakhi punctures the tire and makes getting shocked.

Anupama and Vanraj reminisce about the last time they went on the bike while the bike stops suddenly.

Vanraj tells her to hold on tight or else she will fall and again starts driving the bike.

Anupama imagines her hugging Vanraj behind and them having a good time.

Kavya calls both their cell bother but is unable to connect and thinks that they are avoiding her.