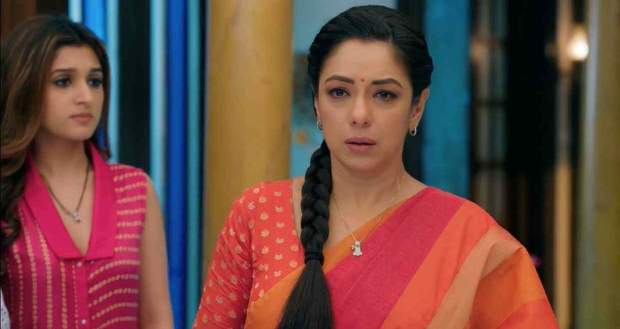 A tense moment happens between GK and Hasmukh when Hasmukh calls Anuj a donkey but it turns out to be April Fool’s day.

Meanwhile, Vanraj lets out his frustration on a client.

Anupama scolds Anuj when he says that Anupama should open a scolding school and they get into a cat-dog fight, but it also turns out to be an April Fool prank.

Hasmukh asks Anuj’s hand for marriage and Devika calls him the most eligible bachelor after Salman Khan.

Anuj doubts their arrival first but shouts in excitement when he comes to know the truth.

Kavya, on the other hand, asks Vanraj to gain his position back and tells him that he is full of attitude and has no money, no self-esteem and no power.

Vanraj asserts that he is the real hero of the story but Kavya chides him and leaves.

In Kapadia house, GK welcomes Anupama and the family by doing their aarti. Devika says that the national crush is getting married, referring to Anuj.

Anuj also does the aarti of Anupama and says a few poetic lines.

Anupama teases Anuj when he mentions a few names of the girls like Sadhna, Aradhana and Pooja.

Anupama and Anuj go into the kitchen to make breakfast.

Hasmukh and GK decide to reunite the lovers who have loved each other for 26 years. GK says that the marriage will take place in Kapadia's house so that Anuj and Anupama can stay away from toxic people.

In the Kitchen, Anuj mimics Anupama when she asks him to go and cute moments of passing things happen between them with a background song playing.

Hasmukh says they should not worry about people rather they will make everyone jealous of their happiness.

An emotional moment takes place when finally the Shagun ceremony of putting tikka and exchanging gifts takes place kickstarting the MaAn’s marriage with the title track of Anupama playing.