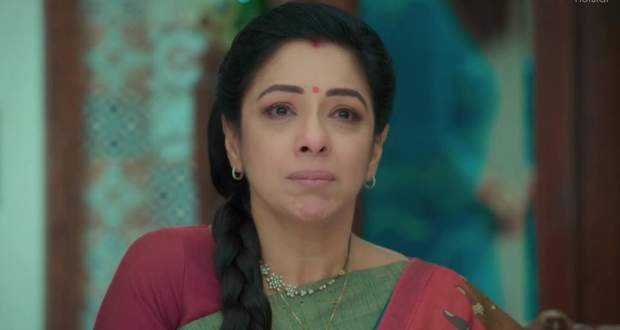 Today's Anupama 2nd August 2022 episode starts with Kavya empathizing with Anupama asking Kinjal to stop crying as she will be there with her during her whole pregnancy even though she will step her foot inside that house.

Kinjal says that she is too scared without Anupama but Anupama asks her to always remain motivated for the sake of her baby.

Moving to Kavya, Anupama asks her to take care of her family and kids as she has gotten the prize of being a mother.

Anupama talks about how her and Kavya’s relationship is twisted and still shares a hug with Kavya.

As Anupama asks Kavya about her wish of having a baby, Kavya becomes emotional but thanks god that she does not have children like Pakhi.

Even though Pakhi stripped Anupama of her respect, Anupama still comes to Pakhi and hugs her while wishing for her happiness.

Meanwhile, Anuj stands outside while Hasmukh and Anu arrive together after enjoying themselves outside together.

Anuj pretends that everything is fine in front of Anu but breaks down in front of Hasmukh as he recalls the earlier event.

While Anu goes to the car to bring water, Anuj tells Hasmukh that he will not allow Anupama to be disrespected like this a second time.

Anuj says that Pakhi and Toshu are incredibly rude people who do not know the value of a mother.

Shocking Hasmukh, Anuj informs him that from now on, neither he, Anu, nor Anupama will visit the Shah household.

Hasmukh feels shattered on hearing Anuj but tells him that he took the right decision.

At the same time, Anupama lights the lamp in the temple and prays to Kanhaji to arrive in that household at least once a year.

Before leaving, Anupama bids everyone a heartfelt goodbye and tells Vanraj that she harbours anger towards him.

Anupama announces that if fate allows, then she will come back with the same tagline as Vanraj, “Anupama is back”.

© Copyright tellybest.com, 2020, 2021. All Rights Reserved. Unauthorized use and/or duplication of any material from tellybest.com without written permission is strictly prohibited.
Cached Saved on: Saturday 1st of October 2022 09:53:57 PMCached Disp on: Sunday 2nd of October 2022 12:03:43 PM