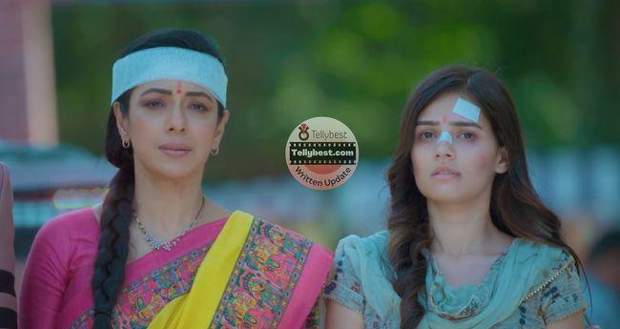 Today's Anupama 2nd December 2022 episode starts with Anupama showing Dimple the Shah house and telling her about the family members.

Dimple asks Anupama about how hard it must be for her to get out of that house to which Anupama replies that it was incredibly hard.

Seeing Leela outside, Anupama introduces Dimple to her and says that they are on their way to the dance academy.

Leela learns that Anupama is giving Dimple a job at the dance academy and asks Anupama if Dimple is going to live with her.

Dimple gets silent while Anupama tries to indicate to Leela not to make such comments when Pakhi appears there.

Pakhi introduces herself to Dimple as Anupama’s ex-daughter and starts her drama as Anupama inquiries about her health.

Pakhi says that Anupama does not care about her own daughter but is helping the girls across the country.

The neighbors ask Anupama and Leela why they are not supporting Pakhi when she is struggling in her newly-married life with Adhik.

Anupama says that she threw out Pakhi from the house so that she can learn to see life in its raw form.

Anupama talks about how Adhik pampers her all the time but she also needs to build her own identity.

Pakhi does not bother to hear Anupama’s suggestion and says that Adhik will take care of her for the rest of her life.

After Pakhi leaves, Anupama goes to her house but gets shocked to see Pakhi not opening the door for her.

Anupama leaves her handmade carrot cake at the doorstep and leaves with Dimple.

At the dance academy, Samar comes and meets Dimple making her laugh with his silly comments which makes Anupama happy.

Meanwhile, Anuj meets with the police officer who tells him that the boys are from very influential families and are trying their best to get out of jail.

The officer warns Anuj that the case might get transferred to a new officer as pressure is being given from the top authorities.

Later, Anupama and Dimple get stopped by those boys who block the road with their car and bring guns to frighten people.

Their leader comes forward toward Dimple and starts dancing around her and Anupama while they shrivel in fear.

Anuj gets to know about those boys getting bail and rushes to find Anupama and Dimple.

Anuj calls Samar and informs him to search for them making the Shah family worried about Anupama.