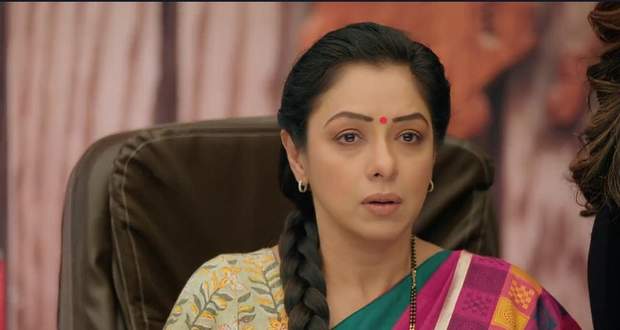 Today's Anupama 2 February 2021 episode starts with Anupama telling Kinjal to focus on her job and not worry about household chores while Vanraj heads towards his office.

Kinjal makes her sit on the chair while praising her and spins the chair.

They laugh while Vanraj comes there and furiously asks Anupama how dare she sat on the chair of his cabin.

He insults her says that both she and Kinjal are trying to bring him down while Kavya comes there and incites Vanraj as he insults Anupama.

He tells them that his name is written on the nameplate while a peon comes there and puts Kinjal's nameplate on the door after removing Vanraj's nameplate and throwing it on the ground.

Kinjal says that she brought Anupama to the office as she is her lucky charm.

He takes the family picture out a drawer and leaves while Dholakiya taunts him but Vanraj stands up for himself and argues with him.

Meanwhile, Samar gifts Nandani a diary and some stationary and tells her to write only positive things as now she has him to share her pain.

Dholakiya introduces Kinjal to everyone while telling her that Kavya and others will assist her in the project.

Everyone leaves while Kavya tells Kinjal that she is not her boss but Kinjal tells her to keep private and professional life separate.

Jhilim and Leela are arguing while Anupama comes there after which Leela berates her and says that Vanraj called her and told her everything.

Elsewhere, Vanraj looks at his nameplate and the divorce papers while remembering Anupama's words.

© Copyright tellybest.com, 2020, 2021. All Rights Reserved. Unauthorized use and/or duplication of any material from tellybest.com without written permission is strictly prohibited.
Cached Saved on: Tuesday 28th of September 2021 06:06:13 AM