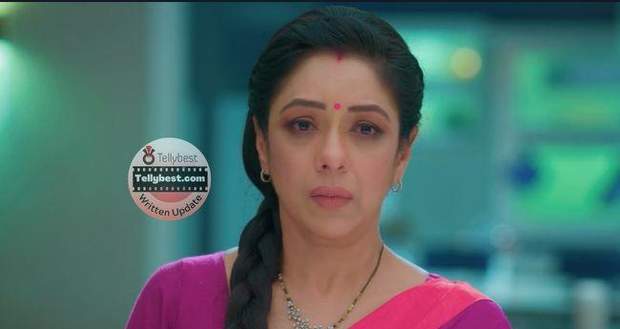 Today's Anupama 2nd January 2023 episode starts with Anuj and Hasmukh sitting in the car while the driver takes him to their destination.

Hasmukh asks Anuj if he is busy to which Anuj stops his work and asks Hasmukh to say what he wants to.

Hasmukh says that he is becoming Anuj’s father for some time while Anuj corrects him by saying that Hasmukh has been and will always be a father to him.

Hasmukh says that Anuj and Anupama are not made for fights and should not get involved in those bitter topics as their relationship is built with love.

Anuj asks Hasmukh what he should do to which Hasmukh advises him to make efforts together along with Anupama.

Hasmukh explains to Anuj that husband-wife are two people from different worlds coming together and they are very different from each other.

If one day, the husband or wife asks the other to change themselves suddenly, then it is not possible for the other to do so immediately.

Anuj tells Hasmukh that his love for Anupama can never reduce in his heart and that he loved Anupama for whoever she is, be it overkindness.

Anuj explains to Hasmukh that he has no problem with Anupama giving others more attention than him as he loved her after seeing those things himself but as the matter is involving Anu, he will not consider any negligence.

Hasmukh says that neither Anuj nor Anupama has any shortcomings in their personalities, it is the situation that is making them act like that.

If they want to change anything at all, they should change the situation instead of fighting with each other.

Meanwhile, Ankush comes to Anupama with tea and sits by her side as she worries about the situation alone in her room.

Ankush tells Anupama about his new year’s resolutions of joining a gym and turning his grey hair back to black making Anupama laugh.

Ankush says that his and Barkha’s relationship is bitter-sweet with both fights and adjustment but Anupama-Anuj is different.

With comforting intentions, Ankush asks Anupama to care for her and Anuj’s relationship and love that still prevails.

Anupama thanks Ankush for his comforting words and compliments his handmade tea as he leaves.

At the same time, Hasmukh says that it is not guaranteed when he has to leave this world but before leaving, he wants to see his family happy together.

Hasmukh expresses his wish to see happiness as his maximum life, he has only seen fights and arguments.

Anuj promises Hasmukh that he will not let his and Anupama’s relationship get rusty and always treasure it.

Hasmukh asks Anuj to drop him at the intersection and refuses Anuj’s offer to take the driver with him.

Anuj hugs Hasmukh and tells him that he felt very happy talking to him and it helped to settle his mind.

Hasmukh gets busy on a call when a truck approaches him from behind and comes closer to him before he can move away.

Anuj gets blamed for Hasmukh being missing

Later, as night falls, Leela and Anupama begin to get worried as Hasmukh still has not returned home and is not picking up his phone.

Anupama tries to calm Leela down while the other family members also get worried after hearing everything.

Anuj returns from his office and learns that Hasmukh is missing after he dropped him at that intersection.

As Anuj tells everyone how he dropped Hasmukh at the destination and had to leave as he was not ready to take the car with him, Leela blames Anuj for leaving Hasmukh in the middle of the road.

Leela says that she needs to talk to Vanraj as he is the only one who can find Hasmukh.

Anuj, Adhik, Samar, Toshu, and Ankush leave the house to search for Hasmukh while Leela calls Vanraj to tell him everything.

Vanraj and Kavya’s sweet new year plan gets ruined as Vanraj gets angry on hearing Leela’s statements and leaves immediately.

After searching every known place, Anuj and others return home and inform the ladies that Hasmukh is not present anywhere.

Leela runs to Vanraj and tells him that Hasmukh has left the house because of Anuj.

Leela accuses Anuj of saying disrespectful things to Hasmukh which made him leave the house without informing anyone.

Vanraj gets violent with Anuj

Vanraj pounces on Anuj and holds him by his collar while everyone tries to stop Vanraj from getting violent.

Anupama defends Anuj by saying that he cannot ever say bad things to Hasmukh to which Leela says that Anuj is different inside with other intentions.

Anupama gets angry on hearing Leela’s comments and tells her that she cannot say such things to her husband in her house.

Anuj asks Vanraj to stop shouting while he talks to Anupama and clearly states that he has no problem with Hasmukh at all.

Leela says that Anuj has problems with them staying in his house and asks Vanraj to take her away.

Anuj and Vanraj get angry and glare at each other like mortal enemies.