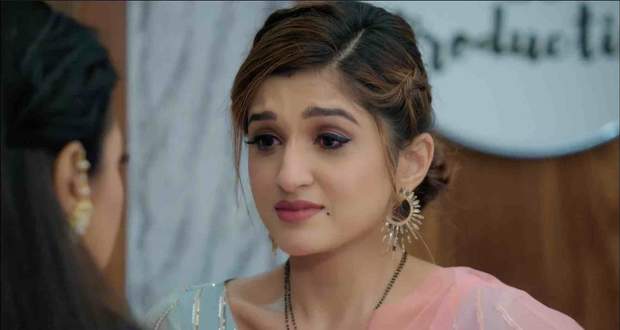 Today's Anupama 2nd March 2022 episode starts with Anupama crying by herself as she continuously chants ‘sorry’.

Anuj walks in and sits beside Anupama who was wailing in regret as she could not give her answer to Anuj’s proposal.

Lowering her head in guilt, Anupama apologizes to Anuj for not being able to convey her feelings in front of the family without any fear.

Anupama tells Anuj that the moment Kinjal told her that she is going to be a mother and Anupama a grandmother, she forgot everything about herself and Anuj.

However, confessing honestly, Anuj says that he cannot understand Anupama’s happiness of becoming a grandmother completely as he has never experienced anything like that in his life.

Anupama feels pain in her chest as she sees Anuj covering up his sadness with his smile.

Meanwhile, Hasmukh and Jignesh discuss Anupama’s helplessness in that situation and become empathetic.

Trying to give Anuj an explanation, Anupama tells him how she could not bring herself to announce her marriage after telling everyone that she was going to become a grandmother.

Anuj listens to Anupama as she explains the fixed social conventions and orthodoxies tied up with each age group.

As understanding as ever, Anuj appreciates Anupama’s feeling of getting the grandmother news when suddenly Anupama speaks up that she wants to marry Anuj.

Anuj takes a sweet time to engulf the words of Anupama and pumps up with excitement while rejoicing his happiness.

Taking out Anupama’s sindoor, Anuj vows to always stay with Anupama till his last breath and wishes to put the sindoor on Anupama’s forehead.

She tells him that she is ready to make him Mr. Anuj Anupama Joshi leading to Anuj’s smile.

Seeing Anuj smile, Anupama shifts closer to him and wraps herself in his arms, taking Anuj by surprise.

Both the lovers feel the warmth of love as they lock their bodies for the first time in each other’s embrace.