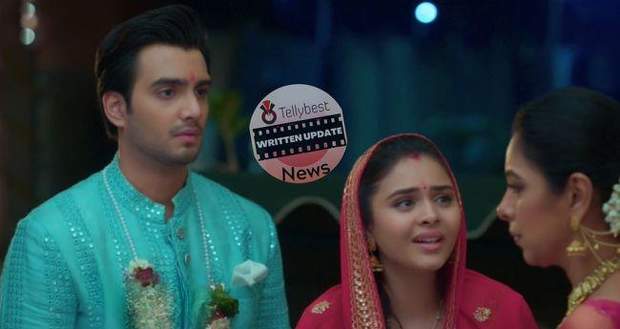 Today's Anupama 2nd November 2022 episode starts with Anupama, Anuj, and the young bridegroom have stepped outside the car when they see Barkha at the threshold.

Barkha in her rage throws a flower pot and asks Pakhi and Adhik how dare they show their faces here.

Ankush tells Barkha to not create drama outside but Barkha dismisses him and says that she was worried about Adhik the entire day only to know that he has gotten married.

Adhik tries to intervene but is rudely told to stop by Barkha who proceeds to ask him how long will his marriage last.

Barkha tells Pakhi-Adhik that their marriage is based on lies and deceit and not love so it will never be successful.

Anupama tells Barkha that everyone is angry at the situation, but Pakhi-Adhik couldn’t be left on the street to die, so Anupama and Anuj took responsibility.

Barkha hearing this is further enraged and hurriedly gets inside the house with tears running down her cheeks.

Inside the house, Anupama doesn’t perform Pakhi-Adhik’s griha pravesh which saddens them.

When Pakhi-Adhik cross the threshold of the house they start seeking the blessings of their elders starting with Ankush, but Barkha refuses to give her blessings.

Barkha challenges Pakhi giving her 6 months to realize the mistake she has committed getting married to Adhik and she shouts at her saying that their marriage won’t even complete 1 year.

Meanwhile, Barkha consumes a lot of pills in anguish, and wonders where she went wrong with Adhik’s upbringing because of which Adhik has gone against Barkha now.

Anupama on the other hand tells Pakhi and Adhik that they have to work on their relationship every day for the rest of their lives to have a successful marriage.

Anupama further urges them to think about what they want to do with their lives.

Pakhi-Adhik again begs for their forgiveness, which Anupama dismisses.

Anupama then leaves and goes to her room and starts thinking about all the things said to Pakhi about her marriage and wonders how she will manage these hurdles.