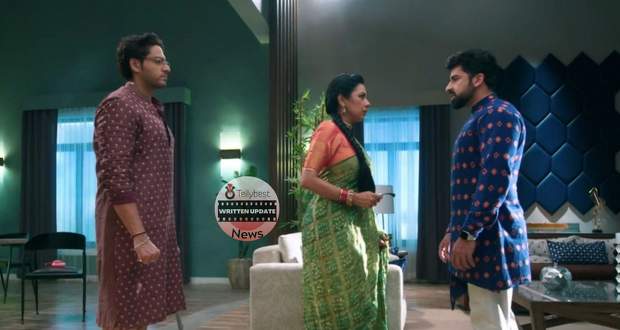 Today's Anupama 2nd October 2022 episode starts with Kinjal taking Anupama’s blessings and sharing a hug with her after Anupama stands with her in her decision.

Anupama and Rakhi nod at each other while Vanraj, Baa, and Toshu glare at Anupama with fierce eyes.

Targeting Anupama, Leela asks her to dance in happiness and distribute sweets as her son’s family is getting dissected according to her wishes.

Leela tells how Anupama is the one who influenced Kinjal into taking a divorce after she did the same thing.

However, Kinjal does not stand silently and replies back to Leela announcing that no one will blame Anupama for her decision.

Rakhi stands in front of Kinjal and declares that the consequences will not be good if anyone tries to force Kinjal to change her decision.

At Rakhi’s request, Anupama leaves the Shah household after assuring Kinjal that she is there with her in this whole chaos.

Meanwhile, Anu asks Anuj the reason behind Anupama visiting the Shah household to which Anuj replies that even though there are clashes in a family, the relationship never breaks off.

Anupama comes back and informs Anuj about the situation while getting comforted by him.

At the same time, Rakhi comforts Kinjal by giving her a massage and says that earlier she wanted to protect Toshu because of her wrong mentality.

Rakhi tells Kinjal how girls are always taught that their value is calculated by the type of husband they marry with.

According to Rakhi, if a woman gets separated from her husband, she is considered a burden to the family and society.

However, after hearing and seeing Anupama fighting for her rights, Rakhi realized that a woman’s life does not end with her husband.

Rakhi says that she will fight for her daughter which she failed to do for herself which shocks Kinjal.

Kinjal gets to know about her mother facing the same situation in her life where her husband cheated on her.

Rakhi says that she failed to raise her voice as she was pregnant with Kinjal, breaking Kinjal’s heart into a thousand pieces.

Both mother and daughter share a warm hug with tears gushing down their cheeks and become transparent to each other after sharing things.

The next day, the puja starts in both the Shah and Anupama’s houses with the family members gathered together.

Later, Anupama, Anuj, and Anu arrive at the Shah’s for the tilak ritual of Pari, and Anu begins to play with Meenu.

Paritosh stares at the happy family of Anupama with envious eyes burning with rage and decides to do something.

While playing hide and sike, Anu hides inside a trunk while everyone gets tensed after not being able to find her anywhere in the house.

At last, Anupama succeeds in finding Anu and tells her not to hide in such a place ever again.

After some time, people from the foster care house arrive at the Shah household and tell Anupama and Anuj that they are there to take Anu back as a complaint has been lodged against them.

© Copyright tellybest.com, 2022, 2023. All Rights Reserved. Unauthorized use and/or duplication of any material from tellybest.com without written permission is strictly prohibited.
Cached Saved on: Monday 21st of November 2022 02:25:37 AMCached Disp on: Tuesday 6th of December 2022 12:42:55 PM