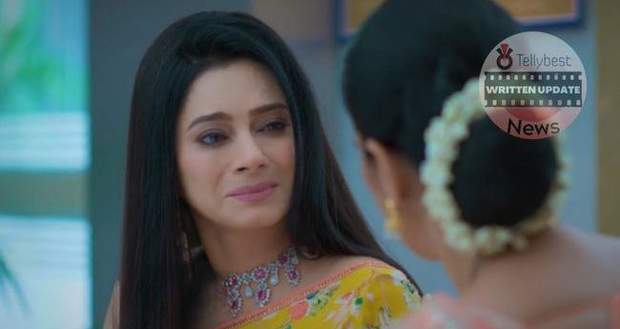 Today's Anupama 2nd September 2022 episode starts with Anuj video calling Anupama and asking her when she is coming back.

Anupama hesitates and thinks of an answer but suddenly Anuj tells her that he is having mood swings and scolded Choti.

Anupama says that parents must scold their children sometimes.

On this Anuj says that he is missing her a lot since he feels he is a new Anuj with her.

Anupama says she is missing him a lot too and is about to hang up the call when Anuj hears Vanraj’s voice and the call disconnects which leaves Anuj irritated.

He calls GK to go to Choti and Ankush says as long as Anupama is not here GK can not do all the work so he takes Anuj to Choti even though Anuj is reluctant.

Meanwhile, Paritosh comes in and Rakhi looks at him annoyed.

Anupama and others congratulate him for being a father and Anupama hands him the baby.

Paritosh cries out tears of joy on seeing her little structure but the baby begins crying in his hands.

Rakhi takes the baby from him and she goes quiet.

Rakhi taunts that babies understand how the person is and this shocks Anupama and Toshu but Samar says that means the baby knows about Toshu’s temper.

Later Anupama instructs everyone to let Kinjal and Toshu talk about their baby but Rakhi is reluctant to leave Toshu with her daughter and baby.

However, Anupama assures Rakhi that this will be the right thing to do and Rakhi gives the baby to Kinjal.

Meanwhile, Anuj goes to apologize to Choti but she apologizes instead for being stubborn, Anuj says she is the best and cutest baby and he loves her while Choti reciprocates.

In the hospital, Kinjal and Toshu talk about the responsibility coming with the baby on them and Toshu says they will do this together. Kinjal also says that their family will make it easy for them.

While outside Kinjal’s room, Rakhi is worried but Anupama asks her the reason.

However, Rakhi does not tell her about Toshu instead, declares that she will take Kinjal and the baby to her home after discharge while Vanraj says this will be Kinjal’s decision not her’s.

© Copyright tellybest.com, 2020, 2021. All Rights Reserved. Unauthorized use and/or duplication of any material from tellybest.com without written permission is strictly prohibited.
Cached Saved on: Saturday 1st of October 2022 11:32:56 PM