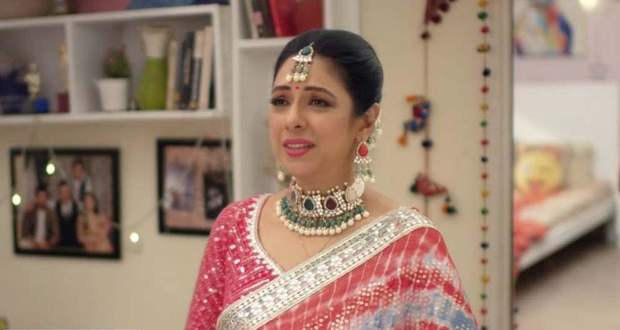 Today's Anupama 30th April 2022 episode starts with everyone complimenting Anupama and Anuj’s looks and blessing them as a happy couple while doing aarti of them.

Hasmukh, Kinjal, the children, Malvika, everyone else does Anuj and Anupama’s aarti but the atmosphere gets tense as Rakhi comes up.

Rakhi does the aarti and tells a poem mocking Anuj and Anupama about their mismatched pairing and midlife crisis.

Furthermore, Rakhi throws money at them after doing the Nazar ritual which highly upsets everyone.

Anupama asks Rakhi not to insult goddess Laxmi in that manner and gives the money to Samar so that he can donate it among the poor.

Again, in the middle of the enjoyment, Leela and Vanraj taunt Anupama for this being her second marriage with Rakhi joining in.

Anupama notices Anuj in distress and decides not to let Anuj get upset on this day as it is special for him.

To cheer up Anuj, Anupama starts a dance on “Aakhiyon Se Goli Marein” in which Anuj and other family members also join with happiness.

Anupama tells Anuj how they danced on this song at their first encounter and thanks him for willingly loving her for 26 years.

Describing their love from friendship to the lovers' stage, Anupama confidently tells “I love you, Anuj” in front of everyone leaving Anuj surprised.

Later, the family members arrange for a game for Anuj and Anupama to play where they have to solve a word puzzle by finding names in it within 27 seconds.

Anuj and Anupama smoothly find most of the names while Vanraj hawks at the engagement ring and goes away for a moment.

Just when the last word “Anupama” is left, Vanraj returns to his spot and points out the position of the word making the atmosphere awkward.