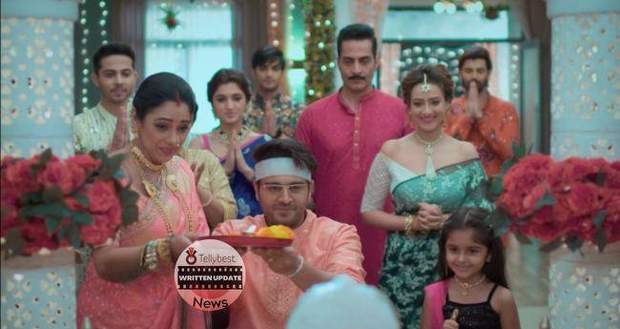 Today's Anupama 30th August 2022 episode starts with the Shahs arriving at the Kapadia’s who welcome them with heartful wishes for Ganesh Chaturthi.

The pooja preparations are done and it is about to begin when suddenly Paritosh gets a call from the caller ID Sanjana.

He hesitatingly picks it up and after the call, informs the family that he has to go now for a job interview and he does not want to leave it because this is a great opportunity for him.

Everyone complies with him and tells him to go but Kinjal gets sad so Anupama cheers her up and says that others are here for her.

The aarti begins and everyone one by one takes the Thali for pooja.

Later Anupama sees Barkha and Ankush in the corner and calls them for the same.

By the end of the pooja, Kinjal begins sweating and suddenly screams since she goes into labor.

Everyone gets anxious and Anuj asks Anupama to take her to the hospital while he feels regret of being incapable to be with her.

In the hospital, Kinjal asks Anupama to not leave her side and so Anupama goes into Operation theater too.

After a while of pushes and screams, the doctor explains that since the normal delivery is difficult we need to do it by operation.

Anupama goes outside and tells the situation of Kinjal to the family.

While everyone agrees to it Leela gets reluctant but everyone tries to reason with her and not make a scene in the hospital by blaming the doctors to be greedy.

However, Vanraj says that whatever Anupama says would be the decision and she decides operation.

Meanwhile, Anuj keeps praying to lord Ganesha and gets an update from Vanraj about the operation.

On the other hand, Samar and Hasmukh try to contact Toshu but his phone is unreachable.

Anupama comes out of the operation theater room and all the Shahs gather around her in search of the update.

She tells everyone that the operation is successful and Kinjal is out of danger.

Then Leela asks about the baby and Anupama cracks it to them that it is a baby girl!

Everyone explodes with happiness and begins congratulating each other.

Anupama and Vanraj shake hands and side hugs each other. No one is unable to contain their joy.

© Copyright tellybest.com, 2020, 2021. All Rights Reserved. Unauthorized use and/or duplication of any material from tellybest.com without written permission is strictly prohibited.
Cached Saved on: Sunday 2nd of October 2022 03:32:55 AMCached Disp on: Wednesday 5th of October 2022 05:53:36 PM