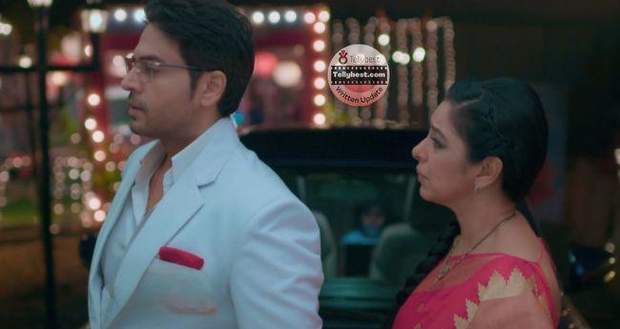 Today's Anupama 30th December 2022 episode starts with Anuj telling Anupama and Hasmukh that he is forced to say things to Leela and his words might taste bitter.

Anuj tells Leela that he thought of not telling anything to her but now the matter has gone over his head.

Anupama stares at Anuj with anxious eyes as he says that he will not stay calm if today’s events repeat themselves in the future.

Anuj tells Anupama that she has to learn to say no as she cannot submit to every stubborn request of the family members.

As Anuj says that he and Anu will stop expecting things from her if she continues to act like that, Anupama widens her eyes in shock.

Anuj leaves the room while Anupama asks Leela to leave her alone as she needs some time for herself.

Anuj enters the bedroom and lies on the bed after throwing his coat and trying to calm himself.

Meanwhile, Anupama also lies on the sofa and cries silently as Anuj is utterly disappointed in her.

Anu notices both Anuj and Anupama and concludes that they are fighting because of her.

Bringing Anupama into Anuj’s room, Anu asks them to resolve their fight as she does not want them to fight with each other because of her.

At the same time, Vanraj and Kavya call Leela and Hasmukh and inform them that they have got the job there.

Leela tries to tell Vanraj about Anuj’s words toward her but Hasmukh stops her by giving signals.

As Leela starts crying in the middle of the call but does not say anything, Vanraj understands that something is wrong there.

Anu shows Anuj and Anupama a handmade trophy and says that she won a trophy that she made herself.

Anupama gets a message from Anu’s friend’s mother who asks her if she can take Anu to their farmhouse for a small vacation.

Anuj says that Anu will go there which makes Anu happy but Anupama gets confused as to how Anuj is allowing her to go alone.

Anupama asks Anuj how he is allowing Anu to go alone to which Anuj replies that he wants Anu to be away from the house as fights and arguments are common here.

Anuj leaves to help Anu in her packing while Anupama thinks about how she can convince Anuj this time.

Anuj helps Anu pack everything while Anupama gives Anu her jacket as it is quite cold there.

Anupama asks Anuj why he is sending away Anu if his life is stuck in his daughter.

Anuj replies that Anu’s happiness is much bigger than his life to him.

The next morning, the friend’s mother comes to pick up Anu and she asks for a family photo before leaving.

Anu leaves after clicking a family photo together with Anuj trying to calm himself.

Anuj notices Anu looking blurry in the family picture and gets disappointed as he thinks that Anu is becoming blurry to others in real life too.

© Copyright tellybest.com, 2022, 2023. All Rights Reserved. Unauthorized use and/or duplication of any material from tellybest.com without written permission is strictly prohibited.
Cached Saved on: Wednesday 25th of January 2023 08:53:28 AMCached Disp on: Sunday 5th of February 2023 04:05:37 AM