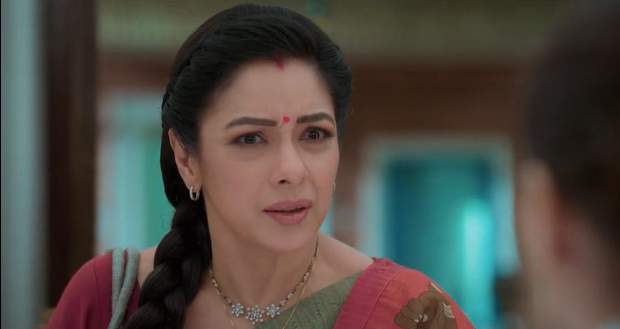 Today's Anupama 30th July 2022 episode starts with Baa telling Anupama to go back and live happily with her daughter and husband while Vanraj agrees and tells her daughter is increasing their already existing problems.

Hurt by their words, Anupama compares all the bad habits of family members being right with her.

Anupama expresses her concern about her loved ones being there.

Vanraj requests her to go back and leave his home.

Hearing this, Anupama gets furious and says she will come for her Baapu Ji and her children.

At the same time, Kavya says Toshu and Kinjal will run to Anupama whenever any problem comes.

Kinjal agrees with Kavya and confronts Toshu and Pakhi and reminds Toshu of his actions against his unborn child.

Anupama feels her upbringing has failed while Toshu tells her to get out with her daughter.

Anupama starts hyperventilating while Kinjal consoles her and Kavya gives her water but she couldn't even hold the glass.

Anupama digs at the past and tells about their action of calling her characterless, feeling ashamed of her.

Anupama compares the accusation against the mistakes of a mother with stars and tells how society blames a mother for every mistake of her children.

Anupama openly says she loves Anuj and married him and she is proud of being Jr. Anu's mother.

On the other hand, Jr. Anu is doing origami with Baapu ji and tells him he's not going to take her home and asks why adults are always fighting and calls adults fools for fighting so much.

Vanraj threatens Anupama to go or he's going to throw her out.

At the same time, Anuj comes and dares Vanraj to touch her.

Anuj takes the reins in her hands as Anupama is crying and confronts Vanraj and Pakhi.

Anuj tells Pakhi not to be seen near Kapadia home and if she comes to meet Adhik he's going to kick him out and then they will know whether she likes him for his status or truly loves him.

Anuj tells Anupama is her everything and advises Kavya she deserves more while Vanraj gets furious with Anuj.

Anuj taunts Toshu for seeing her mother crying and Vanraj for his hypocrisy of hearing insult of someone else daughter's but cannot hear about his own.

Vanraj tells Anuj to take his daughter and Anupama and get out of his house and never come back.

© Copyright tellybest.com, 2022, 2023. All Rights Reserved. Unauthorized use and/or duplication of any material from tellybest.com without written permission is strictly prohibited.
Cached Saved on: Monday 21st of November 2022 09:36:41 PMCached Disp on: Thursday 1st of December 2022 10:12:11 PM