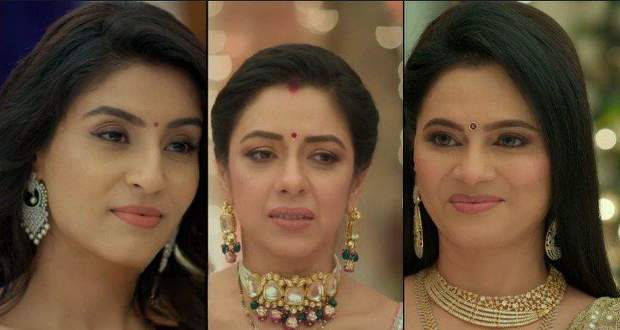 On the other hand, Pakhi says it's fine if Adhik doesn't want to wear the badge while Adkhi flirts and says it would be nice if someone special helps him out.

Pakhi helps Adhik to put on his badge while Samar notices Pakhi blushing and warns her.

Pakhi says Samar should shut up and walks away.

Anupama reminisces about her own baby shower while she gets Kinjal ready for the next stage of her life.

Rakhi, Leela, and Anupama apply Alta, and Bindi and help her out on the beautiful jewels which make her glow from within.

Further, Samar sends the baby shower photos to Vanraj which fills his heart with joy.

Later, Ankush teases Anuj about becoming a grandfather so early while Anuj says he is happy as he got promoted.

Toshu is amazed to see his wife Kinjal in a beautiful dress.

Kinjal gets slipped while Anuj saves her and helps her out.

Further, Vanraj video calls Leela and is filled with love looking at his daughter-in-law Kinjal.

Vanraj controls his anger while Leela cuts the call.

Later, the baby shower continues while Rakhi finds out the bill from Leela's purse which states the polishing amount of Kinjal's bangles.

Rakhi taunts Leela by saying that instead of giving her daughter the old gold bangles, they should have skipped it entirely.

Further, Anupama explains that the bangles are not old but inherited, to which Rakhi says it's just a way to cover up middle-class poverty.

Hasmukh stops Rakhi and asks her to stay within her limits and says that she should respect Leela's love towards Kinjal.

Rakhi says that these words like love, respect, and inheritance are just for their namesake while Anuj stops Rakhi and advises her to cut the drama.

The baby shower rituals continue where Leela explains everything to the guests and the reasons behind it.

Further, Rakhi moves further to complete her part of the ritual but is stopped by Leela as according to the rituals Anupama is supposed to complete it first.