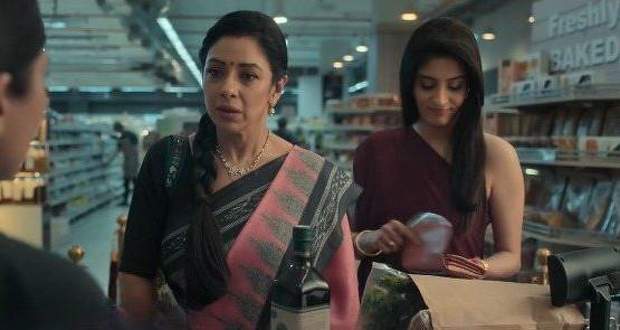 Today's Anupama 30th May 2022 episode starts with Anuj feeling bad about not being able to give Anupama a family and talks about introducing Anupama to his brother's family.

Meanwhile, Anupama falls asleep and Anuj tucks her into the bed lovingly.

On the other hand, Kavya is scolded by Leela as she arrives at the Shah house at 4 AM.

Irritated by Leela's attitude, Kavya asks why she was waiting for her as she already informed them about her late arrival.

Leela accuses Kavya and taunts her for roaming with her ex-husband but Kavya is unbudged.

Further, Toshu, Baapuji and Kinjal watch Anupama and Anuj's pictures while Vanraj watches from a distance.

Meanwhile, Samar offers morning tea to Vanraj and processes one step closer to his father.

On the other hand, Anupama is cheerful after visiting all the special places in Mumbai and asks if Anuj wants to visit any important place.

Meanwhile, Kavya asks Leela to suggest a good timing as she is inaugurating a new venture with Anirudh.

Annoyed by Leela's taunts, Kavya says that she is not Anupama who keeps listening to her taunts and forgives everyone in the end.

Sweety suggests only Anupama can convince Kavya not to take divorce while Leela denies it as they don't want to bother Anupama with their daily quarrels.

Meanwhile, Anuj brings Anupama to his old orphanage house and gets emotional.

On the other hand, Hasmukh and Leela express their worries on Vanraj's condition while Samar overhears their conversation.

Later, Anuj gets teary-eyed about how he faced difficulties being an orphan child.

Further, Anuj expresses how he learned the word thank you before he could even speak the word mother.

Later, Anuj shares how a family brings the greatest blessing in children's life and cries his heart out.

Meanwhile, Anupama says that her relationship is not just the happy parts but they will share their hardships together as well.

© Copyright tellybest.com, 2020, 2021. All Rights Reserved. Unauthorized use and/or duplication of any material from tellybest.com without written permission is strictly prohibited.
Cached Saved on: Wednesday 29th of June 2022 09:11:34 AMCached Disp on: Saturday 2nd of July 2022 08:18:38 PM