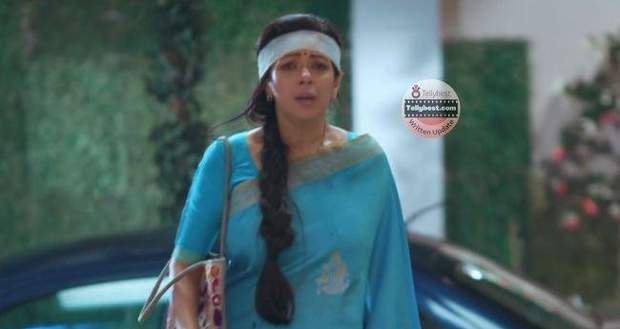 Anupama says she will not change her decision after getting scared and asks Vanraj to realize that Dimple is also someone’s daughter.

Vanraj says that he is sympathetic toward Dimple who faced such an incident but he is not supportive of helping her by going out of the box.

Suddenly, Anupama gets a call from the police and informs everyone that she has to go to the Kapadia mansion immediately.

Before leaving, Vanraj again warns Anupama to take back her name from the case but Anupama says that although she is sorry for what the family is going through, she is not at all sorry for helping Dimple.

After Anupama leaves, Vanraj asks everyone to be extra cautious and proposes to Pakhi and Adhik to come and stay with them.

However, Adhik declines Vanraj’s offer and says that they will manage by themselves which bothers Pakhi a bit.

Meanwhile, Dimple spots Anuj sleeping on the sofa and packs her bags to get out of the house as she does not want any danger coming up on Anupama and her family.

As Dimple proceeds towards the door, she bumps into Anupama, Ankush, and Barkha, who come back from the Shah house.

Anuj wakes up from his sleep and asks Dimple where she is going with her luggage.

Anupama replies that Dimple is escaping from the house so that they do not have to face any danger because of her.

Dimple breaks down into tears and hugs Anupama saying that she does not want her family to suffer because of her.

Anupama and Anuj ask Dimple to not think in such a way and assure her that they are on her side despite the dangers and risks.

Anupama informs everyone that the boys have been caught by the police and they have to go to identify them the next day.

Hearing that Dimple says that she would not be able to go to the police station and face those boys as she is scared.

Anu comes and tells Dimple that she will go with her if she is scared which brings a smile to Anuj and Anupama's faces.

On the other hand, Pakhi complains about Anupama's kindness towards other people whereas she does not care about her own daughter.

Adhik gets irritated as Pakhi says that Anupama is looking after an orphan and Dimple but does not care about her.

Asking Pakhi to stop talking, Adhik says that it is not right for Pakhi to think about Dimple and Anu in such a way.

Anupama, Anuj, Ankush, Anu, and Barkha encourage Dimple by making a circle around her.

The next day, Kinjal and Kavya leave for work despite Vanraj asking them to stay home.

After doing a puja, Anupama, Anuj, and Dimple arrive at the police station to face the truth.

Holding hands with each other, Anuj, Anupama, and Dimple proceed toward the police station to confront those monsters.