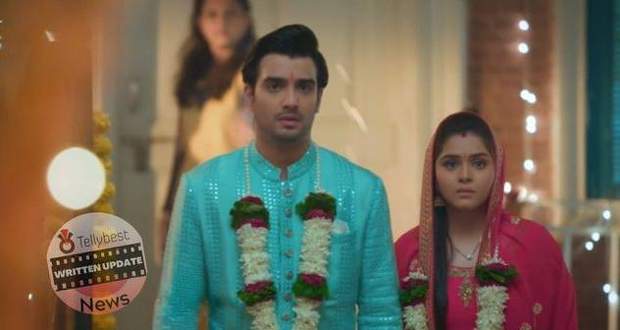 He also tells Adhik that they supported him, but he let them down.

Kavya accuses Pakhi of being despicable as well as harshly tells her that she lacks sense, and Samar agrees with Kavya.

Ankush tells Anupama that she is correct given that everything is incredibly quick in this era, but he is seeing an instant wedding for the very first time.

Kavya tells Pakhi that if she believes that life after getting married is a happy ending, she is mistaken.

She goes on to say that the real struggle commences after getting married.

Kavya goes on to ask Pakhi what she intends to do if her family does not recognize her relationship.

She wonders what they'll do to remain alive if their family abandons them.

Pakhi asks Kavya why their household will not recognize them, claiming she performed the wedding properly with all rituals.

Anupama and Leela question Pakhi about why she didn't wait a day.

Adhik defends himself, claiming that making a decision was difficult, and requests that at least Anuj comprehend his feelings for Pakhi.

Adhik believes that if Vanraj accepts, others will be easily persuaded.

Vanraj walks away from the scene, ignoring Pakhi.

Ankush questions Adhik about why he didn't wait a day.

According to Anupama, Pakhi and Adhik are unaware of the consequences of what they've done.

Shahs are concerned about Vanraj's response to Pakhi's behavior.

Leela requests that Kavya accompany her to Vanraj while Kavya claims she lacks the fortitude to confront Vanraj.

In the meantime, Anuj requests that Anupama give him medicine because he is suffering from a headache whereas Ankush decides to tell Barkha about Adhik and Pakhi's marriage.

Vanraj tosses Pakhi's bag out the window which leaves the Shahs dumbfounded.

Leela requests that Vanraj halt the drama but he claims that not all daughters are a boon.

He is disappointed and sad about being Pakhi's father while Anupama gets overcome with emotion.

Vanraj adds that because he is a father, he will not curse Pakhi, but he will also not bless her or Adhik.

© Copyright tellybest.com, 2022, 2023. All Rights Reserved. Unauthorized use and/or duplication of any material from tellybest.com without written permission is strictly prohibited.
Cached Saved on: Monday 21st of November 2022 04:27:09 AMCached Disp on: Tuesday 29th of November 2022 10:21:15 AM