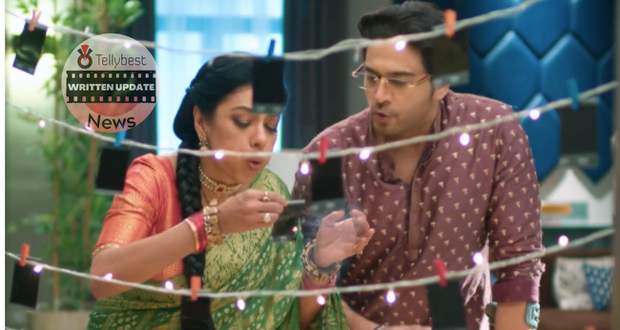 Today's Anupama 30th September 2022 episode starts with Leela and Vanraj declaring that things are going to be all right now that Kinjal is back at home with Pari.

Paritosh promises that he will try to win Kinjal’s heart with his love and care because he wants to lead a happy family with her and Pari.

Leela distracts everyone from this matter and raises the topic of the Navratri celebration to lighten the mood.

As the family discusses the first Navratri celebration with Pari, Rakhi enters the house and says that Pari will celebrate her first Navratri in her house.

Rakhi takes Pari in her arms and declares that she is taking both Kinjal and Pari back to her house because she cannot bear to let her daughter live with Paritosh.

However, Kinjal denies to leave and tells Rakhi that she is angry over Paritosh, not the whole family, and wants Pari to celebrate her first Navratri with her family.

Rakhi asks Kinjal about her own rights over Pari as her grandmother to which Kinjal instantly agrees but says that she has something to sort in that house.

After Kinjal goes inside with Pari, Rakhi declares that she will also live in that house because she does not want her daughter to live with Paritosh.

Meanwhile, Anupama suggests Anuj distribute the Diwali bonuses early to all the employees so that they can handle the expenses of Dhanteras and other things.

Anuj reminds Anupama about the first day she visited him in the same office and how she could not even open a laptop.

Coming back to the present, Anuj expresses how much proud he is of Anupama’s skills in handling his business.

However, Anuj informs Anupama that she is missing out on her dance academy and asks her to focus there a bit while he looks after Anu and the business.

Anupama compliments Anuj for his understanding while Anuj recalls his and Anupama’s office romance.

Playing a slow-beat song, Anuj asks Anupama to dance a bit for him while Anupama becomes shy.

Anupama agrees and teases Anuj by back hugging him while he remains seated in his place as she dances with a smile.

Anuj holds onto Anupama’s saree and pulls her closer while Anupama reminds him that it is their office.

Elsewhere, Kinjal worries after Rakhi asks her to make a decision soon on one hand and Leela and Vanraj express their gratefulness for her return on the other.

As Kinjal searches for Pari’s toy, she finds her and Paritosh’s pictures in the cupboard and remembers everything once more.

Just then, Paritosh hugs Kinjal from the back making Kinjal push him off with a scream.

© Copyright tellybest.com, 2022, 2023. All Rights Reserved. Unauthorized use and/or duplication of any material from tellybest.com without written permission is strictly prohibited.
Cached Saved on: Monday 21st of November 2022 08:53:46 AMCached Disp on: Wednesday 7th of December 2022 03:55:38 PM