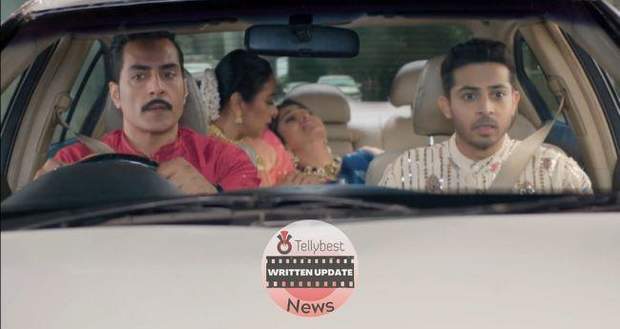 Today's Anupama 31st August 2022 episode starts with the Shah family rejoicing at the news of the arrival of a baby girl and tells Anupama to call Anuj and share the news.

Anupama calls Choti and Anuj who are overwhelmed by happiness.

Later, before hanging up Anuj asks her if Kinjal and Anupama are fine to which Anupama nods.

Following this Anupama goes back to the Shahs and they ask her to define their baby.

She tells them that she is like a cute little angel and goes back to a flashback where the nurse brings the baby and Anupama washes her hand and takes her.

She looks at her big doe eyes and little hands curling against her finger.

Back in the present, Vanraj expresses his heart and soul desire to see the baby as soon as possible.

Meanwhile, Anuj, GK, and Choti have sweets on the special news, and Barkha, Ankush, and Adhik walk in.

On GK’s sign, Anuj shares sweets with the three on the good news, and Ankush thanks him for letting them stay, but Anuj confirms it is just temporary but Ankush thanks even for that.

Barkha tries to be caring by reminding him of medicine and says Anupama will also forget in the chaos of the hospital but Anuj says that she does not forget anything.

On the cue, Anuj gets Anupama’s reminder message of medicine and smiles.

In the hospital, Vanraj and Anupama look at the baby through the door and Anupama video calls Anuj.

She shows her the baby and begins talking when suddenly Vanraj bareges into the frame and tells Anuj that he should have been here as this is a really new feeling of being a granddad.

While speaking Vanraj puts his hand on Anupama’s shoulder and Anuj’s smile falters out of jealousy and wishes he was there.

Following this everyone gathers around Kinjal and thanks her for the baby when she asks about Toshu and Anupama convinces her that he’ll be back soon.

Suddenly, the nurse brings the baby to the Shahs and on cue, the baby becomes the apple of any eye for all.

Everyone carries it and overwhelms but Vanraj cries out of joy and is embarrassed by himself so he goes out.

Leela gives the right to Anupama to give the first elixir of the baby’s life to the baby with the first drop and Anupama accepts gladly.

Everyone is happy and has their attention on the baby however, Anupama begins wondering why Toshu has not returned yet and why is his phone unreachable.