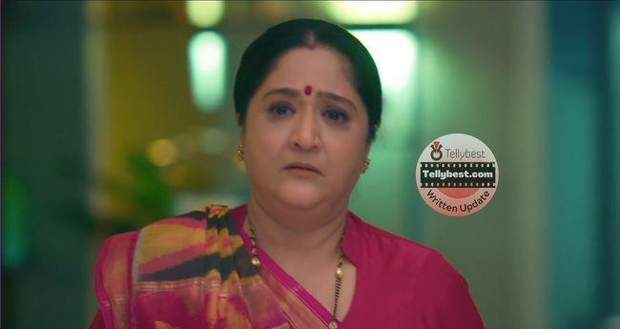 Today's Anupama 31st December 2022 episode starts with Anupama recalling Anuj’s words and getting teary as she does not want her family to fall apart.

Just then, Kavya calls Anupama and says that she and Vanraj have got a job in Delhi which is the best thing that happened.

Kavya tells Anupama that her and Vanraj’s relationship desperately needed a break which they are finally getting.

Explaining to Anupama that even though she loves the entire Shah family, still Kavya feels that she and Vanraj always remain engaged in family issues and do not have any time for each other.

Anupama comes to a realization and understands that she also has been doing the same thing as Vanraj and sidelined Anuj in some ways.

As the sweet moments between her and Anuj flash in front of her eyes, Anupama realizes that she and Anuj have not spent quality time for a long period.

Kavya says that one should not let the relationship between the husband and wife get ruined as that is the base connection of all other relationships.

Anupama tells Kavya that everything is all right there and assures her that Leela was just being herself while she talked with them.

Kavya informs Anupama that she and Vanraj will return after sightseeing the whole of Delhi and hangs up.

Anupama decides that she will make Anuj special again with her actions and try her best to win back his heart.

Later, Anuj comes downstairs to leave for the office and spots all the people getting busy with their own activities in the living room.

Anupama gives Anuj his iPad and tells him that she has made special dishes for him so he should return early.

Anuj replies that he will eat his lunch and dinner outside as he has back-to-back meetings with international clients.

Barkha asks Anuj why he is going to the office on the last day of 2022 when he should be spending that with his family.

Meanwhile, Kavya assures Vanraj that everything is fine at home but Vanraj does not buy it totally.

Kavya demands Vanraj’s total presence with her while they celebrate New Year’s Eve together.

After bringing the passes for the top hotel in Delhi, Kavya gets on top of Vanraj after pushing him to bed and says that it will be the best night for them.

Vanraj plants a kiss on Kavya’s forehead while she clings to Vanraj after telling him “I love you”.

Kinjal returns from Mumbai and thanks everyone for taking care of Pari in the meantime.

Everyone tells the family about their individual plans for New Year’s Eve which leaves Anuj and Anupama on their own.

Anuj notices everyone discussing their plans with their partners and meets the sad eyes of Anupama which breaks his heart.

As Kinjal asks Anuj to call Anu back, Anuj refuses as he says that Anu is very happy being there.

Anuj asks Anupama to call Anu sometimes as she is her mother which makes Anupama silent.

Hasmukh asks Anuj to drop him on his way as he wants to visit a new temple opened by his friend to which Anuj gladly agrees.

© Copyright tellybest.com, 2022, 2023. All Rights Reserved. Unauthorized use and/or duplication of any material from tellybest.com without written permission is strictly prohibited.
Cached Saved on: Wednesday 25th of January 2023 09:49:02 AMCached Disp on: Thursday 9th of February 2023 04:59:06 AM