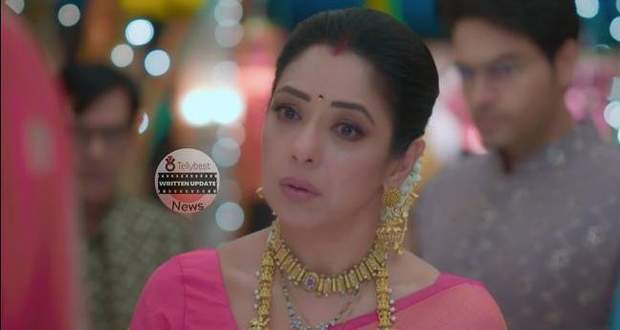 Today's Anupama 31st October 2022 episode starts with Vanraj asking Pakhi to leave and telling her that she no longer can live in this house.

Leela cries and requests Vanraj to stop while Anupama tells him to not be so harsh on them but he sticks to his decision.

Vanraj yells Pakhi's name, "Mrs Pakhi Adhik Mehta" asking her to leave while Pakhi cries and looks at her father.

Pakhi remembers the old days of joy which now are gone.

Anuj narrates a sad poem while Anupama and all others watch Pakhi leave.

Pakhi starts picking up her belongings and Adhik helps her. She tells them that she regrets making such a mistake.

Pakhi says that she is willing to make everything right but Vanraj won't change his mind.

Adhik tells Anuj that he was expecting everybody to understand them and Anuj says that they have hurt everybody's emotions and explains to them that this was a selfish decision.

Pakhi also requests and tells him that she can't rely on anyone else.

When Vanraj is sitting at the table, Hasmukh comes and sits next to him.

Hasmukh tries to explain to him by telling him that not accepting Pakhi is not right and Kavya also tells Vanraj to not take decisions in anger.

Hasmukh says that one day they will have to accept her and Adhik, so why not now?

Hasmukh explains to Vanraj that he should not give up on his daughter and that sometimes children make mistakes that parents can do nothing about but forgive them. He gives examples of Paritosh and Kinjal and Kavya and Vanraj as well.

Outside the house, Anuj stands beside Pakhi and Adhik and tells them to think about Barkha.

Meanwhile, Kavya tells Vanraj that his anger is only going to upset him while Samar and Leela also join Kavya.

Anupama comes and sits next to Vanraj as Anuj walks in from the door. He says to both parents that their children might repeat such mistakes if they are not taken care of now.

Anuj tells them to not leave Pakhi and Adhik stranded.

In the meantime, Pakhi is shivering with fear and asks Adhik if this was a mistake but Adhik denies it.

Adhik holds her and tells her that he doesn't know what to do now and says that he believes that Anuj will help them.

Everybody is trying to change Vanraj's mind while Anupama looks at him and he looks back.

Vanraj stands up and tells everyone that since Pakhi is stuck to her decision, so will he.

After announcing his final thought he leaves the room.

© Copyright tellybest.com, 2022, 2023. All Rights Reserved. Unauthorized use and/or duplication of any material from tellybest.com without written permission is strictly prohibited.
Cached Saved on: Monday 21st of November 2022 05:30:33 AMCached Disp on: Saturday 10th of December 2022 02:18:43 PM