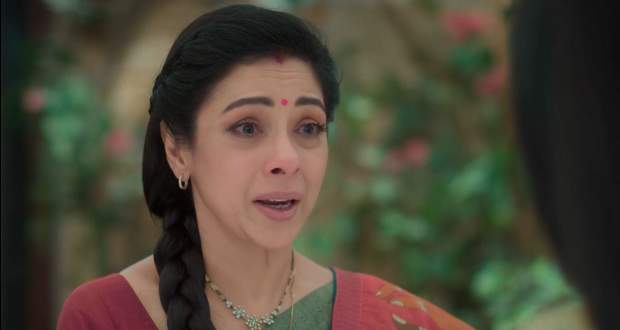 Today's Anupama 3rd August 2022 episode starts with Kinjal and Kavya crying as Anupama moves out from the house, while the other Shah members don't feel bad about their mistakes.

Anupama remembers her time spent in Shah house while Kavya tells Anupama that she is always going to be there for Anupama as a friend.

Anupama bids an emotional goodbye to Baapu Ji and he wishes her all the happiness in the world.

Anuj, Anupama and Anu leave the Shah house whereas the rest of the Shah members stand still.

Anupama asks Anuj for some space and tells him to take Anu inside while she sits in the car.

She remembers everything that happened at the Shah house and is heartbroken and thus, panics.

While at the Kapadia’s, Ankush tells Barkha and Adhik that Anuj wants to make an announcement.

Anuj tells everyone that he is going to do it soon and tells Sarah to get a coffee for him.

At the Shah house, Rakhi Dave tells everyone that she is going to come tomorrow.

Baapu Ji feels helpless and doubts his existence as he couldn’t save Anupama from getting insulted.

Kavya and Kinjal calm him down but he is upset by the way Anupama is treated and scolds everyone for being so selfish and mean.

He tells everyone that Anupama was the reason for the house’s happiness and they all will regret behaving with her in such a manner.

While at the Kapadia’s, Anupama freshens up and finds a message by Anu on her bed to stay happy.

Vanraj tells Baapu Ji to calm down and not be angry as it will worsen his health condition.

Baapu Ji scolds Vanraj and tells him not to pretend that he cares about him.

On the other hand, Anupama tries to start fresh and carries a bright smile on her face, Anu and Anuj try to cheer Anupama.

She tells Anu how the box that she kept on her bed made her happy and how important it is to be living in the moment and cherish it.

Meanwhile, Baapu Ji claims that hurting a mother would bring no fortune to anyone ever.

Kavya and Baapu Ji tell Vanraj that it was his mistake that he did not take a stand for his children’s mother as he does for his own parents.

© Copyright tellybest.com, 2022, 2023. All Rights Reserved. Unauthorized use and/or duplication of any material from tellybest.com without written permission is strictly prohibited.
Cached Saved on: Monday 21st of November 2022 08:28:46 AMCached Disp on: Thursday 1st of December 2022 10:31:29 PM