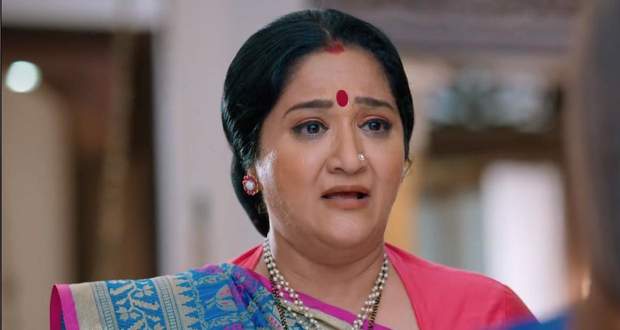 Anupama tells Baapu Ji that she is the reason for everything wrong happening in the house. Baapuji consoles her and asks her to not to blame herself.

Kavya offers coffee to Vanraj and apologises to him for not preparing tea for him. she further questions him if he will go back to his house when his anger will cool down.

Vanraj tells her that he came to her house because he loves her. Meanwhile, Anupama witnesses Toshu keeping Kinjal’s engagement ring in the temple.

Toshu says that his parent's relationship became a problem for his marriage with Kinjal. Anupama further assures him that he will get married to Kinjal.

Vanraj recalls how Anupama used to help him in everything just at one call. Elsewhere, Kinjal arrives at the Shah house and Baa gets angry with her.

Kinjal apologises to Baa on behalf of her mother’s words. Baa rebukes Kinjal as her mother insulted Shah family in front of everyone.

Kinjal gets emotional and questions Baa about her mistake. She asks Baa to not to behave rudely with her because of her mother’s mistake.

Baa shuts the door at Kinjal’s face, while Anupama asks Baa to not to act like Rakhi. Samar prays that Toshu gets the love of his life without any difficulties.

Vanraj creates a mess while looking for his belongings in the room. Kavya asks him to keep his belongings at one place as she can’t help him every time.

Samar tells Anupama that he will help her in earning money, while Anupama asks him to concentrate on his studies.

Baa misses Vanraj and gets emotional on thinking about him. Anupama apologises to Baa for being the reason for her suffering. Later, Vanraj arrives at the Shah house with his bag.

© Copyright tellybest.com, 2020, 2021. All Rights Reserved. Unauthorized use and/or duplication of any material from tellybest.com without written permission is strictly prohibited.
Cached Saved on: Tuesday 8th of June 2021 08:46:02 PMCached Disp on: Wednesday 16th of June 2021 12:43:43 AM